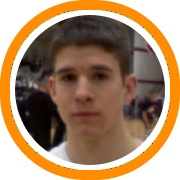 A few new prospects from New England emerged during pool play.  Here is a look at some of the players and teams that caught our eye:

•  Bay State Magic won their opener 62-57 against the B.C. Eagles out of Newburgh N.Y.  Scituate's Sean McCarthy was impressive, scoring inside, rebounding and being a presence in the paint. The 6’9” big man will do a post-graduate year at Loomis Chaffee next season. Lightning quick guards Kendall Gilliams and Tim Young of Brockton High penetrated at will and were disruptive on defense.

•  The Boston Warriors Elite beat the Rockland Rockets 62-57. Akeem Williams out of Avon hit threes and controlled the tempo.  6’6” Peter Williams of Westford Academy showed a nice inside game to compliment Williams.

•  Behind the shooting of Trinity Catholics' Zach Messenger, the all around play of Byram Hill's Jason Mendall, and floor leadership of Demetrius Ferguson of Greenwich, the Connecticut Flame got by J B Hoops of Scranton, PA.

•  The Glastonbury Hawks were not as fortunate battling M33M of Buffalo to a 71-65 loss.  Jon Karas and Cody Otto had solid showings in the defeat.

•  Chesire Academy's Nino Greer came around after a tough first half to lead New Heights to a great comeback win over Montco Magic of Germantown PA.  Greer got to the basket, made threes, and did it defensively to bring his team back after being down by 15 in the first half. An impressive showing by this athletic guard.

•  The New Hampshire Falcons were beaten by Rochester NY’s East Coast Fusion.  Jamie Zajac from Bishop Guertin and Cole Etten of Hollis Brookline led the way to a halftime lead.  Aziz Dieng was physical and battled inside, while Rhett Terrell of Nashua South also played well. Hollis Brookline's Josh Cone-Roddy showed he could step out and shoot the three ball.

•  The Mass Rivals are a well rounded squad.  Evan Smotrycz is a poor man's Larry Bird, at 6’9” with a great skill set and ability to make threes.  6’10” Carson Desrosiers of Central Catholic shores up the middle.  6’7” Ryan Canty of St. John's Danvers plays the 3-4 spot. Cerebral point guard Billy Marsden handles the rock as he does at Central Catholic. Allen Williamson of Pingree School is a sleeper showing a nice mid-range game and athleticism.  6’7” frosh Egi Gjikondi is one to keep an eye on.  Jason Arias, a sophomore from New Hampton, played smart as well.

•  The tandem of Richard Madol and Peyour Gugai of Trinity High School showed athleticism, smarts and keen passing ability. Their NH Heat team was beaten by the Orange County Crusaders of N.Y.

•  The Vermont Dawgs took a 40-34 defeat at the hands of Long Island Lightning. The Dawgs are led by Adam Gamelin and Louie Merola of Colchester High, and Rice's Marcus Duktiewcz.