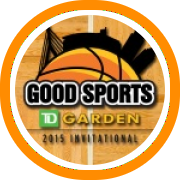 For the second consecutive season, the TD Garden will host regular season high school contests as part of the Good Sports Invitational.  Put on by Hoop Mountain and Garden Neighborhood Charities, eight games featuring 15 teams from Massachusetts and 1 team from Rhode Island will be played on Saturday, January 10th.

The schedule of the event is as follows:

The seven games feature some of the best teams in the state of Massachusetts, and one of the most storied programs in New England in Bishop Hendricken.  This is one of only two opportunities that high school teams have to play in the TD Garden all season, with the other being the state semifinals.  NERR was present at the introductory press conference at Boston Basketball in Waltham, and will offer previews all of the boys games set to take place on the storied parquet floor:

Both teams presently stand at 4-0 in the MIAA.  Both coaches are very familiar with each other's style of play, and at several points during the press conference each described the other as "friendly rivals."  This will be a game that will come down to the wire, as both teams are very disciplined in their approach.  Nick Parvello, one of the senior captains of Masconomet, expressed minimal concern with getting his team ready to play.  Jitters of playing under 17 championship banners can be daunting, but Parvello said, "It will be important to take a deep breath before.  Once the game starts, it will come natural.  It will just be another game."

Two of Greater Boston's most storied programs will be squaring off against each other.  Belmont, whose teams consistently compete in the Middlesex League, will have a host of alumni from many of the top teams that Eastern Massachusetts has seen in the past 20 years on hand.  "It is a real treat to bring our players there, to bring out staff there, and to bring our town there to play such a strong program in Somerville," Belmont head coach Adam Pritchard notes.

Somerville used to play games at the old Boston Garden in the 1970s, and reviving the tradition will surely give the Garden a Somerville flavor.  Somerville is lead by one of the most underrated players in the area in 6'5 junior forward Fru Che.

Malden Catholic brings an experienced group into the Garden.  Head coach Jim McCune is in his fourth season at the helm, and bringing this group of seniors into the Garden is special to him.  "We are a very experienced team," Coach McCune said.  "We made the decision to build the program through our freshman [four years ago].  They have been playing varsity basketball for three years now.  I think we can compete with everybody, but now we need to beat somebody to take the next step."

MC is hoping that that "somebody" is the defending Rhode Island Division 1 state champion Bishop Hendricken.  Lead by junior point guard Kyle Henseler and sophomore swingman Justin Mazzulla, Hendricken is off to a 5-2 start.  Mazzulla, who has a scholarship offer from Boston College, is the younger brother of former West Virginia standout Joe Mazzulla (also a Hendricken product).  Having coached both Mazzulla brothers, head coach Jamal Gomes has created a barrier for comparing the two.  "I told him the first day of freshman year, I'm never comparing him to his brother," Gomes said.  "We don't bring it up.  Justin has come a long way."

Gomes recently took his team down to a tournament at Disney World, where they ended up dropping a triple-overtime game to a talented team from Ohio.  "We like playing teams in the non-league that will show us different styles," Gomes said.  "We have played a team from Utah, as well.  It really helps us to see different styles of play so we can be ready for our season in Rhode Island, and we can be ready to build on the tradition and legacy we've worked hard to establish."

Thanks to team manager Brendan Durkin's buzzer-beating shot in last season's matchup, this was the most memorable game from last year's Good Sports Invitational. Expect this to be one of the more well-executed games of the day, with North (6-0) sporting 7 seniors on the roster, and South (5-1, only losing to North) having 8 seniors.

North head coach Paul Connelly and South head coach Joe Killea expressed excitement over the prospect of playing on the hallowed ground of the Garden.  "Going back to my high school days, our girls team used to play before the Celtics played," Connelly said.  "They used to play high school games before the Celtics game!  To play a regular season game in the Garden, it's a great experience for everyone.  Steve [Gibbs] does a wonderful job in putting this together."

The interesting aspect of this matchup is that players on both teams grew up playing against each other every day.  Newton North senior guard Sam Jefferson, who is much improved and will be a big factor for North all season, joked about the familiarity between the players, saying, "It's really cool to be playing against each other.  It's cool to see how everyone's moves have gotten better, except when they play us.  It will be a great experience on playing them again."

"Two teams from the Garden City playing in the Garden," Connelly said.  "It's going to be pretty special."

This rivalry game will bring two passionate student sections and two passionate towns into the Garden.  Under new head coach CJ Neely, Franklin comes in at 3-1 while getting adjusted to a new offensive system.  Having previously run the flex offense, Neely has installed a motion offense that the team is adjusting nicely to.  Having played in the Garden last year, the players will be in a good position to control their emotions.  "We play in packed houses all the time," senior captain Marcus Geisi said.  "The only thing is it's a different venue.  There will be some nerves before the game, but once we start the game it's just another game."

Mansfield is 4-0 on the season, and adjusting to life without Brendan Hill, who injured his knee in the fall.  Even without Hill, who is committed to UNH to play football, Mansfield continues to roll due to the great play of seniors Ryan Boulter and Michael Boen.  Boen, the Stonehill-bound 6'4 swingman, said the familiarity between both teams will help to ease the nerves of playing in such a grand venue.  "It's a game where guy have to come in and compete," he noted.  Look for this to be one of the more competitive games of the day!

CM sports one of the most talented backcourts in the MIAA.  Guilien Smith, (the Dartmouth-bound sniper), Brandon Twitty, and Kellen Grady have lead CM to a 4-1 start to the season, with their only loss in double OT to Newton North (in a game where Smith and Newton North senior guard Tommy Mobley combined for 73 points).  Head coach Denis Tobin has had his team play in the Garden before, and it can take some adjustments compared to a normal high school venue.  "I think it's a big advantage," Tobin said on having played in the Garden before.  "The sound is different; you can't hear the coaches from the sideline.  And you don't get as much time to warm up.  But we will be able to enjoy it, win or lose.  We will still be playing games after this; we don't go home if we lose.  There is not that pressure."

Andover is undefeated at 6-0, and head coach David Fazio is coming off his 400th win as a head coach.  Andover is one of the more dangerous offensive teams in the state, lead by senior guard David Giribaldi and sophomore guard EJ Perry.  Connor Merinder has been one of the best defensive front court players in the MIAA so far this season, and the Trinity-bound big man will look to protect the rim against the penetration of the CM guards.

These two programs have enjoyed so much success over the last decade that the expectations for this matchup will be through the roof.  Central Catholic features one of the top freshman in the state in Tanahj Pettway.  The skilled guard has been on fire of late, and will look to showcase his skill set on the biggest stage.

St. John's Prep has talent in both the upperclassman and underclassman ranks.  Ben Judson and Kareem Davis have lead SJP to a 4-1 start this season, with the only loss coming to St. Anthony's of New Jersey in the Shooting Touch Holiday Shootout last weekend.  Assistant coach Matt Smith noted that the next two weeks will be critical for SJP.  "We took a beating that day," Smith said of the St. Anthony's loss.  "But it was good for our kids to see how they played.  The next two weeks we face a gauntlet.  It will show us what we are made of."