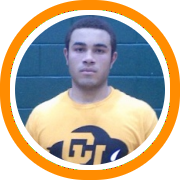 Grandy Glaze, a six-foot-five forward in the class of 2011, has put an early end to his recruitment.

“I have been there two years in a row for their elite camp and loved the school and the coaches,” Glaze said.  “It’s the small class size and I just loved the coaching staff.”

If you’ve never seen Glaze play before try to imagine a poor man’s version of a young Charles Barkley and you’ll have an idea of what Glaze brings to the floor.  At six-foot-five he is a little undersized to play the power forward position at the next level but he compensates with incredible power and aggressiveness that allows him to consistently score and rebound inside the paint.  But Glaze is never more “Barkley-esque” than when attacking with his dribble, rarely looking to break anyone down but simply charging at the bucket like a dump truck running down a hill.

Put it all together and Glaze is truly one of a kind and very difficult match-up for most defenders.

Glaze arrived in New England this year having already caught the eye of a number of high-major coaches after a successful summer with Team Takeover Canada for head coach Mike George.

Among the schools that were showing interest were the likes of West Virginia, Florida, South Florida, Iowa State, Providence, St. Joe’s, Maryland, Akron, and Old Dominion.

“UNLV liked him because he can play on the wing and also at the four position,” George said.  “They are used to playing with four guards and with smaller line-ups and although he’s undersized with his motor it is more about what he does have than what he doesn’t.”