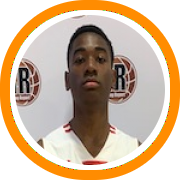 At this time last year, Jordan Geronimo was a complete unknown and, by his own admission, expecting to end up at a division II or III small college.

The New Jersey native was transferring to St. Paul's School in New Hampshire because of its academic reputation and the fact that his older sister had a positive experience there.

Shortly after arriving in New England, he made his way to a Mass Rivals workout one night last fall and immediately caught the eye of Rivals' director Vin Pastore.

"I saw a young man who was a 6-foot-6 wing with a 7-foot wingspan walk into the gym and he was off the charts athletically," Pastore recalled. "His body moved just the right way and he had an impressive stroke from beyond the arc. He was a puppy as we say in the basketball world. A super talent that hadn't, and still hasn't, even come close to scratching the surface."

Nine months later and things have totally changed for Geronimo. He had a good opening season at St. Paul's, but certainly not one that would have suggested this type of rise was on the horizon. The ascension started to pick-up steam this spring and picked up serious steam over the summer.

By the time it was all said and done he had picked up 30 division I scholarship offers including the likes of Indiana, UConn, Georgia, West Virginia, Xavier, Iowa, Virginia Tech, Texas A&M, Penn State, Utah, and Providence among others.

Indiana got the opportunity to host him for his first official visit this weekend and didn't let him get off campus before securing his commitment.

For as much as Geronimo has improved within the last year, there is still a long way to go. While he is an incredibly gifted athlete with a ton of potential both defensively and shooting the ball, he's still relatively new to the game, and very new to playing on the perimeter. Consequently, he'll need some time to continue to develop but ultimately he has a massive upside.

"He looks like a lot of guys selected in this year's NBA Draft," Pastore said. "Long, athletic with a sweet stroke and a candidate to turn into a three-and-D guy."