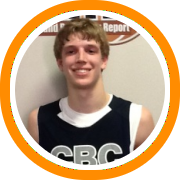 In its 28th year of honoring the nation’s best high school athletes, The Gatorade Company, in collaboration with USA TODAY High School Sports, announced the recipients of the Gatorade Boys Basketball Player of the Year awards earlier this week.

In New England the awards went to Kurt Steidl in the state of Connecticut, Garet Beal in Maine, Tyler Gibson in Massachusetts, Eric Gendron in New Hampshire, Bonzie Colson in Rhode Island, and Matt St. Amour in Vermont.

The award, which recognizes not only outstanding athletic excellence, but also high standards of academic achievement and exemplary character demonstrated on and off the court, distinguishes these six players as the best in their respective states.

Steidl is a 6-foot-6, 185-pound senior shooting guard averaged 24.9 points, 9.5 rebounds, four assists, and four steals while shooting 82 percent from the free throw line this past season, leading the Tigers (18-6) to the Class LL quarterfinals. A 2013 Connecticut High School Coaches Association All-Star selection, Steidl scored 31 points and pulled down 16 rebounds in a 63-57 win over New Britain in the second round of the state tournament.

Steidl has maintained a 3.68 GPA in the classroom. A devoted parishioner in his church community, he has volunteered locally assisting the elderly and on behalf of the Boys and Girls Club of Ridgefield.

Steidl has signed a National Letter of Intent to play basketball on an athletic scholarship at the University of Vermont this fall.

Gibson is a 6-foot-6, 200-pound senior center averaged 21.4 points, 15.3 rebounds, 4.8 blocks and 2.1 assists per game this past season, leading the Bulldogs (19-4) to the Division 3, South Region semifinals. A two-time Brockton Enterprise All-Scholastic selection and the 2013 South Shore League MVP, Gibson had eight games this season with at least 20 points and 20 rebounds. He concluded his prep basketball career with 986 points.

Gibson has maintained a 3.32 GPA in the classroom. He has volunteered locally as a youth basketball coach and has also donated his time as an elementary school mentor.

Gibson has signed a National Letter of Intent to play basketball on an athletic scholarship at the University of Massachusetts at Lowell beginning this fall.

Beal is a 6-foot-5, 210-pound senior wing averaged 33.8 points, 10.9 rebounds, 5.5 assists, 2.5 steals and 1.5 blocks per game this past season, leading the Royals (18-1) to a berth in the Class D state tournament. The state’s returning Gatorade Boys Basketball Player of the Year, Beal shot 60 percent from the field, 48 percent from 3-point range and 79 percent from the free throw line. Also awarded Mr. Basketball as named by the Maine Association of Basketball Coaches, he carried Jonesport-Beals to the 2012 Class D state championship as a junior, averaging 22.3 points, 8.7 rebounds, 3.8 steals, 3.6 assists and 1.6 blocks.

Beal has maintained an A-minus average in the classroom and serves as a member of his school’s student council. In addition to donating his time on behalf of the National Honor Society, he has volunteered as a positive mentor to elementary school students and as part of both community fundraisers and cleanup efforts.

Beal has signed a National Letter of Intent to play basketball on scholarship at the University of Maine this fall.

Gendron is a 6-foot-3, 170-pound junior guard averaged 19.7 points, eight rebounds, four assists, three steals and two blocks this past season, leading the Tomahawks (13-6) to the Division I state tournament. New Hampshire’s Mr. Basketball in 2013, Gendron scored 14 points to help hand eventual Division I state champion Trinity High its only loss of the season in a 60-56 regular-season win.

Gendron has maintained a 3.86 GPA in the classroom. He has volunteered locally on behalf of the Leo Club and as a basketball coach with the Merrimack Youth Association.

The 6-foot-6, 225-pound junior forward averaged 16.8 points, 9.8 rebounds, 3.5 blocks and 1.2 assists per game this past season, leading the Saints (24-9) to the New England Prep School Athletic Council Class AA tournament championship game. A First Team All-NEPSAC Class AA selection, Colson averaged 14.7 points and 15.0 rebounds per game in the NEPSAC Class AA tournament as the eighth-seeded Saints reached the final, where they lost to Cushing Academy by one point on a 40-foot buzzer-beater.

Colson has maintained a B average in the classroom. A member of the St. Andrew’s School chorus, he has volunteered locally as a youth basketball coach and referee.

St. Amour is a 6-foot-3, 180-pound senior guard averaged 30.7 points, 11.9 rebounds, 5.7 assists and 3.4 steals per game this past season, leading the Thunderbirds (13-9) to the Division I quarterfinals. The state’s returning Gatorade Boys Basketball Player of the Year, St. Amour was also named the Burlington Free Press and Vermont Basketball Coaches Association Player of the Year as a junior. He finished his prep career with 2,064 points, third in state history.

St. Amour has maintained a 4.13 GPA in the classroom. Also a soccer standout, he has volunteered locally on behalf of youth sports programs, blood-donation drives and the American Cancer Society’s Relay for Life.