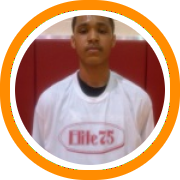 Basketball Spotlight's Summer Slam had a loaded final four in their u14 division with Expressions Elite, Team Scan, F.A.C.E.S., and Team Final.

The final proved to be a dramatic one as Expressions would meet Team Scan and utilizing a balanced attack, hold on for a 52-51 decision en route to the championship.

The title caps an impressive summer run for Expressions as they took the championship at the Hall of Fame Junior Nationals and advanced to the gold bracket at AAU Super Showcase with a 3-1 record.