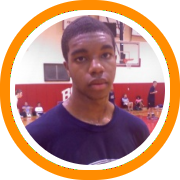 Yesterday we examined the most improved sophomore prospects at Saturday’s New England Elite 75 Showcase – Frosh/Soph Edition.  Today, we want to examine some new prospects we discovered in the class of 2013.

Dennis Green, Winchendon – A New York native who makes his debut in New England after transferring to the Winchendon school, Green is a big and versatile guard who is equally comfortable playing the point or the wing.  His reputation was that of a skilled shooter but he showed plenty of explosiveness, pushing the ball in the open floor, defending full court, and finishing at the cup.

Ausar Madison, Worcester Academy – He was like a little maestro with the ball in his hands, almost impossible to rattle and a great decision maker.  While he is a pure point who is at his best setting the table for his teammates, he also proved that he could score points in bunches himself, making shots off both the catch and the dribble.

Travis Berry, Kent School – A big time prospect with a full set of tools, Berry is a long and athletic six-foot-four guard with a strong frame.  He was at his best going to the rim, showing a quick first step and the bounce to finish above the rim in contact.  We were also impressed by the fact that he was willing to get inside and do the dirty work, posting up smaller defenders and rebounding in traffic.

Dekeeba Battee, Northfield Mount Hermon – A big man with a plethora of physical tools, Battee has the look of a high-major prospect at the four.  He is agile and athletic and plays with a great motor on both ends of the floor.  He is skilled enough to take guys off the dribble at times but at his best when dominating the paint.

Jaylen Blakely, Brockton – Our first good long look at the talented guard left us very impressed.  Blakely shoots it well from the perimeter, shows good handles, sees the court and passes well.  He also has a good temperament to play the point guard position, looking to pass first but capable of creating when necessary.

Others who caught our eye:

Justin Bristol, Prout – A horse on both ends of the floor who outworks people inside, throws great outlet passes, is skilled enough to pick and pop, and has some deceptive athleticism.

Omar Orriols, Charlestown – One half of a very impressive Charlestown duo on the wing, Orriols is a strong athletic three-man who went strong to the rim, going right at his defender and using his length well, while also showing some touch with his jumper.

Douby Maduegbunam, Charlestown – Akosa’s younger brother is the second half of the duo and he has the same high level athleticism that his brother possesses.  He made some very impressive moves off the dribble, most notably a pro-hop at full speed, and also showed some range on his jumper.

Brandon Wheeler, Trinity Catholic – A scoring guard with a versatile offensive arsenal, Wheeler has the ability to get to the cup but also showed he could make the defender pay with a solid stroke from downtown.

Josh Jones, Hope – An instinctive playmaker who is always in attack mode, Jones made one of the most impressive dribble drives of the day going around a defender with a euro-step in the open floor before finishing with a left-handed lay-up off his left foot.

Richard Canon, Boston College – He’s long and lanky with plenty of growing still left to do but has the look of a player.  He moves well without the ball, passes effectively, and can hit the outside shot.

Nate Clarke, Reading – An undersized guard who compensates with good athleticism, Clarke is tough and scrappy, able to do a variety of different things with his bounce, and also an asset on the defensive end of the floor.

Ryan Murphy, Winchester – A high school starter in just his freshman season, Murphy plays bigger than he is around the paint, has good speed and quickness, deceptive shot blocking ability, and a terrific motor on both ends.

• Colton Bivinghouse is a young post who is very crafty around the basket with quick flip shots.

• Matt Sherlock is a versatile offensive player who can shoot or drive and an equally valuable defender.

• Malin Segal is a quick tenacious point who sees the floor very well and has a solid floor game.

• Ben Andrews is a potentially deadly catch and shoot player who can catch fire from beyond the arc.

• Kendall Harrington is a swingman with good size and a versatile inside-out offensive attack.

• Sean McNally plays bigger than he is around the rim but has emerging perimeter skills with drive and kick potential.

• Christian Iozza turned some heads with a consistent stroke to 3, a capable slashing game, and a strong body.

• Lee Messier is a pure shot maker who has the size to get it off without much separation from his defender.

• Daylon Ore is a high level athlete with a tight southpaw handle who gets himself into the lane where he can show some bounce.

• Shaine Watkins is a standout defender who also has good vision with the ball, a quick spin move, and a high arching jumper.

• Jon Robinson is another lefty guard with a quick first step and strong body who can create for himself or others with his passing ability.