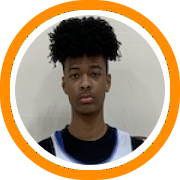 After profiling some of the bigger 2022 prospects in New England yesterday, our final recap from the 2018 Elite 75 Showcase - Frosh/Soph Edition will focus on some of the best freshmen guards.

Dasonte Bowen, Worcester Academy – Too instinctively unselfish to deliver a loud performance in a showcase type setting, Bowen was nonetheless very impressive with positional size as a true point guard, instinctive feel for the game, floor vision, and passing touch.

Jonathan Guerrier, Lexington Christian – He’s a power guard with broad shoulders, strong body, and an already established reputation coming into the high school ranks. He has length, instincts, a nose for the ball, and playmaking ability to be as dominant as he wants at this early stage.

Kyle Hicks, Fessenden – A big guard who looked more developed since the Junior Elite 75 in March, Hicks was comfortable bringing the ball up the floor, generating offense, and scoring from the mid-range game in.

Amari Howell, Braintree – A floor general and two-way player, Howell is quick and cut with maturity beyond his years. He can make plays for himself and others offensively but truly separates himself on the defensive end of the floor.

Darien Gibson, Wareham – He’s still a tad undersized but he’s highly skilled. Gibson has his handle on a string, a good shooting stroke, and a ton of finishing craft around the rim. Overall, he’s very advanced with the ball.

Mekhi Dedrick, Boston English – He hasn’t even started to grow into his body yet but already plays with a ton of speed and explosiveness as he’s a burst in the open floor and already capable of playing up above the rim.

Tony Felder Jr., Malden Catholic – An experienced and creative young guard, Felder is a scoring guard who can make plays for both himself and others. He has a toughness about him and pressures opposing guards defensively.

Julian Webb, Braintree – Another talented freshman guard from Braintree, Webb plays with scoring instincts and is just beginning to transition into a lead guard but can already put the ball in the basket in bunches.

Caleb Williams, Rector – The younger brother of current AIC product and former Brooks star Adonis Williams, Caleb is cut from a similar cloth as he starred defensively while making timely slashes to the rim.

Benny Nguyen, Quincy – He’s been a player who has done the vast majority of his damage near the rim to date but he’s beginning to extend his range and becoming more of a true guard.

Evan Millerick, Catholic Memorial – What he may lack in sheer height, he makes up for in heart because Millerick can really play. He’s a true point guard with a high I.Q. and bright future.

Deven Austin, Wilbraham & Monson – A 14 year old freshman who hasn’t even begun to grow into his body, Austin has loads of natural talent and skill. He’s an inevitable growth spurt away from being a very good player.

Jonathan Inozil, New Heights Charter of Brockton – Just the opposite of Austin, Inozil is already strong for his grade and physically imposing, both off the dribble as well as on the defensive end.

Darryl Simmons II, Putnam Science – The undersized guard is learning by fire on a loaded PSA squad and the experience showed out on Saturday as he showed his speed, skill, and shooting potential.

Kyle Murray, Catholic Memorial – A heady point guard with maturity beyond his years, Murray pushed the ball in transition, showed a sound shooting stroke, and made solid decisions with the ball.

Dimitry Philippe, Arlington Catholic – A bulldog of a lead guard, Philippe is compact and strong, able to play through contact, and get downhill with his attacking style off the dribble.

Sincere Dozier, Kennedy – He looks the part with a good build and athletic frame and has the motor to match as he played hard. Dozier was best off the bounce, but also unselfish and willing to create for others.

Cam Pollock, Manchester Memorial – He may not pass the eye test yet but Pollock can play and just flat out knows how to put the ball in the basket. He was one of the most pleasant surprises of the evening.

Michael Olivencia Jr., Kolbe Cathedral – He’s made nice strides since the Junior Elite 75 in March and appears poised to be a big part of the future at a Kolbe Cathedral program that looks bound to return to its proud roots.