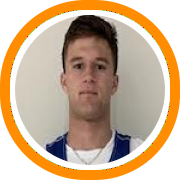 There was a long list of freshmen guards that impressed us at the Elite 75 Frosh/Soph as the class is obviously strong on the perimeter. Here’s a look at some of the best:

Taelon Martin – He’s only just beginning to grow into his frame but Martin already possesses the length, touch, instincts, handle, vision and court awareness to be special when it comes to making plays. If he works hard for the next four years, he has a very bright future.

Aireus Raspberry – One of the most productive freshmen in the field, this lefty was said to be exclusively a driver as a youngster, and while he’s still very good going to the rim, he was also capable of drilling jumpers and creating space with step-backs on the perimeter.

Quest Harris – A southpaw jitter-bug who dynamic with the ball in his hands and able to make a huge impression by the time the day was done, Harris has the speed and quickness to make plays on demand, both in the open court as well as half-court.

Luis Reynoso – Already seasoned and mature, Reynoso has a powerful build on the backline and is strong with the ball, able to do damage with his pull-up and also a deceptively good team defender. One of the more impactful overall players in the class right now.

Adrian Williams – He’s not new to the high school scene after playing on his high school varsity team as an 8th grader and Williams showed maturity beyond his years here as he was strong with the ball, saw the floor well and made shots in both the mid-range area and beyond the arc.

Daman Tate – The younger of the two Tate brothers, Daman is a big guard with long arms and a good understanding of how to use that advantage to get extra separation off the dribble. He showed a shot-making element to his game as well and even fired a couple of nice passes.

Jake McElroy – His game is tight beyond his years with no wasted dribbles and great efficiency. He doesn’t turn it over, is a prolific shooter from the outside and is equally smart and crafty with the ball in his hands.

Cairo McCrory – His combination of length and speed was top notch but it was the high motor that allowed him to maximize his abilities. He has natural scoring tools on the wing but was also unselfish and willing to move the ball.

Ben Eke – A long and athletic guard with a balanced floor game and good natural feel for how to attack while staying under control, Eke made a quick impression with his coaches who noted his “very bright future.”

Judson Martindale – A big time three-point shooter and overall smart player, Martindale has a clear dominant weapon from behind the arc but is gradually developing his ability to attack close-outs and impact the game with his court vision and passing ability.

Spencer Aronson – A high energy guard who never takes a possession off and is capable of imposing his will at this level on both ends of the floor. He has good size and acceleration for the backcourt but can also stop quickly for a very dangerous pull-up jumper. (6’0, G, Holliston)

Damien Perry – A scoring guard who handled the ball well, had good range on his jumper and was especially dangerous in the open floor, Perry made a nice first impression with his performance here.

Connor Printz – One of the best pure shooters in the class, Printz’ southpaw stroke looked like it was going in every time it left his hand. A high character kid, he also played hard, ran the floor and showed an ability to finish when at the rim.

Jaden Castillo – He played primarily in the paint coming up the ranks in middle school and so HoopRootz was full of praise for his development as Castillo played the point guard position here, distributed it willingly to his teammates and made perimeter shots.

Timmond Williams – A good sized guard with various scoring tools, Williams was both able to make shots from the perimeter while also attacking the rim, and earned an early spot in the NERR prospect database as a result.

Mathias Tankersley – He’s undersized right now but he plays much bigger than he is and has an uncanny ability to finish inside among bigger players. He’s also a competitive defender who can get under opposing ball-handlers to pressure the ball and force turnovers.

Robert Baum – Attacking style lead guard who is smooth and able to get to the rim with ease, especially when playing in the open floor. He’s also super crafty with the ball in his hands. (6’0, G, St. Andrew’s)

Jordan Santos – He just might be the very best shooter in New England’s freshmen class, but what was most noteworthy about his game in this environment was his heady court presence and ability to make all the right decisions with the ball.

Charles Clemons – A coach’s son who plays just the type of heady floor game you’d expect, Clemons was credited for being a “great passer” by his coach and also stood out by being smooth, changing direction off the bounce and making mid-range jumpers.

Daejon Pendelton – An up and coming point guard who has the rare ability to get almost wherever he wants on the court, and is just working on finishing with more consistency, but Pendelton is already shifty on offense with quick hands and feet alike defensively.

Justin Villaneuva – A very solid player with an unassuming floor game, Villaneuva is skilled and versatile for a young layer. He’s a good all-around athlete, plenty capable with the ball in his hands and a quality finisher in traffic as well.

Joey Merrill – Merrill is as skilled as he is heady. He’s been obviously well-schooled as he’s equally impressive dribbling it, passing it or shooting it and used that versatility to embrace the quick decision making with the ball that was a point of emphasis for the guards.

• Tyler Kolek is a heady southpaw who showed a high acumen for the game, good shooting stroke & understanding of spacing;
• Samuel Dion is a skilled guard and arguably one of the best three-point shooters in attendance;
• Samuel Adusei is a floor general with good quickness, the ability to score at the rim and court vision;
• Craig Faria is a scorer on the perimeter with a strong body and the ability to get buckets off the bounce or with his jumper;
• Jordan Richard proved to be an opportunistic scorer and good shooter from the three-point line;
• Marty Silveria is a strong and tough guard who competes, backs down from no one, makes big shots and can really defend;
• Marcus Brunson is a power player with a consistent jumper and high basketball I.Q.;
• Sean James is a growth spurt waiting to happen and already a knockdown spot-up shooter who just knows how to play;
• Will Spencer is a three-point sniper who moved well without the ball and played an unselfish floor game;
• Makarios Russell is a smooth lefty guard with a savvy handle who had no problem breaking his man down off the dribble;
• Arek Boynerian is a power player on the perimeter who can bully smaller guards and muscle his way to his sweet spots;
• Evan Cook is a true point guard who plays with poise and confidence and already understands what it means to run a team;
• Julius Cardoza caught our attention with his shooting technique as well as his willingness to communicate on the floor;
• Noah Kamba is a tempo point guard with tight handles on the offensive end and quick hands on the defensive end;
• Evan Young is quick and compact with explosiveness off the bounce and the vision to make high level passes off the dribble;
• Jayson Clayton has plenty of natural tools to work with thanks to his quickness and ability to attack either side off the bounce;
• Emerson Burns looked the part of a knockdown shooter who was nearly automatic when left open at the arc;
• Blake Burke is a lefty slasher with quickness and vision alike who was at his best in transition;
• Marc Dolgin is a gritty and unselfish guard with a strong motor and unselfish floor game;
• Sean Hurley is a long combo-guard who made some nice passes in transition and also splashed some open threes;
• Kyle Butler looks like a quality point guard in the making with a skilled and selfless style along with a quick first step;
• Justin Lopes Jr has good court awareness and passing ability off the bounce for an underclassmen;
• Rudy Hytmiah impressed with a quick first step and the ability to finish around the rim;
• Sebastian Borgard was very quick and made a number of impressive plays with the ball in his hands;
• Christian Beck shot the ball well from the mid-range on out and appeared to have a very solid overall feel for the game.