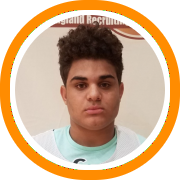 There was no shortage of quality guards at last week’s Elite 75 College Showcase. In fact, they came from all six states in New England as well as beyond the region’s borders for the opportunity to show out in front of the 70 college coaches.

Tyrone Perry, Woodstock Academy – A strong lead guard with great intensity, Perry looked bound for scholarship level recruitment. At 6-foot-3 he has great positional size along with plenty of sheer force. He showed an instinct to match his physical tools too as he made great rolls in pick-and-roll and consistently generated good looks.

Mykel Derring, Proctor Academy – The would-be rising senior is instead on his way to Proctor Academy and the class of 2019. He showed a blend of skill at athleticism here, throwing down some nice dunks off of two feet but also continuing to demonstrate why he is one of the more underrated shooters in New England.

Craig Preston, Spire Institute – The Manchester Memorial alum is on his way to Ohio for a post-graduate year. He’s a self-made player who has developed his body, jump shot, and acumen for the game at the same time. He has no fear in him and a natural toughness about his floor game.

Jayden DePina, Beaver Country Day – This scoring guard has been known to do work with his jumper, but on this night he was showing some increased burst off the bounce with some crafty finishes around the rim. When he lets the game come to him and takes what the defense gives him he’s very dangerous.

Devonn Allen, Wilbraham & Monson – He was his typical self – showing grit, toughness, and leadership tools. Numerous coaches noted his ability to defend the ball while he also made his fair share of shots to show off an offensive repertoire that has continued to evolve.

Brad Landry, Choate – His game is certainly trending in the right direction as his conditioning, shooting, and overall skill all seemed to be at their peak. What differentiated him though was his passing as he not only shared the ball willingly but made a number of quick, instinctive finds.

Keenan Marseille, Hermon – Most people probably didn’t realize he was playing on a badly sprained ankle as he was able to get into the paint and make plays despite not having his normal explosiveness. For those that did know, his toughness was extremely impressive as was his ability to adjust his game and still have command over his team.

Nick Casiano, Kingswood-Oxford – Some guys are just wired to score and Casiano is certainly one of those. He’s a threat in all three ranges as he showed off deep range on his jumper as well as the handle to create space off the dribble and some of his patented mid-range floaters.

Tyairus Sands, Kennedy – The unsigned senior was able to attract the attention of several coaches looking for a late score. He is athletic with long arms and even made more shots than expected despite a fairly unorthodox looking release.

David Speidel, Newton North – One third of what should be a bigtime backcourt trio for Newton North next year, Speidel plays the game with an edge that resonates on both ends. He really locked up defensively but was simultaneously able to run the show offensively.

Travis Evee, Boston College – He may only be 5-foot-9 but this lefty plays with great pace, is tight with the ball, and shifty with his ability to change speeds. He makes those around him better as a true point guard should but also makes shots of his own with good range.

Trevor Brink, Vermont Academy – This three-point specialist announced his arrival in New England with a productive night. He’s a shooter with a fluid release who can change his speeds to get into the lane and doesn’t mind being physical around the paint.

Luca Mirabello, Northwest Catholic – He’s done a great job building up his body with a now chiseled physique. It isn’t just for show though as he’s able to play through contact comfortably. That only aided his playmaking ability as he made some high level drives to create offense for both himself and his teammates.

Kyle Henderson, Algonquin – This fearless southpaw shot the ball extremely well. While his ability to make shots in bunches stood out the loudest, there were intangibles to match as he played with a high motor and appeared to be naturally competitive.

Jarrett Martin, Catholic Memorial – He put his name on the radar with his performance as he showed good athleticism and the ability to be a defensive standout. He has the physical tools to score in the open floor and the I.Q. to be productive in the half-court. Overall, he had a very productive floor game.

Andrew Varoli, St. Luke’s – He was easily one of the five best shooters at the showcase. He knocked it down, virtually whenever he got his feet set, and had a complimenting basketball I.Q to match. His niche hasn’t gone unnoticed either as his recruitment has picked up dramatically in recent weeks.

Elijah Ramos, Wheeler – If he doesn’t pass the look test at first glance…keep watching because this guy can play. Wheeler played an efficient, mistake free style at the point but also showed he could shoot it with range and get the motor up and running at full speed to jumpstart a game.

Zak Swetye, Darien – The recent Darien alum is headed to North Carolina for a prep year that will take him back to the class of 2018. He shot the ball well off the catch and also stood out by competing and playing hard through the breakdown and scrimmage sessions.

Marcus Friend, Lee Academy – An upstate New York native who is headed to Lee Academy next season, Friend has the thick build and strong body to leverage opposing guards. He’s also a true floor general who runs the show and distributes the ball first and foremost.

Jake Sytulek, Farmington – Sytulek is a very good shooter with a compact stroke from downtown and he fit right in with offensive structure because he doesn’t force anything. He could actually stand to be a little more aggressive though as he looked capable of making shots in bunches.

Peter Wilson, St. Raphael – An all-state guard Rhode Island, Wilson brought his same attacking mentality with him to Elite 75. He was scrappy on both ends and has worked himself into a very good perimeter rebounder and defender to match his known scoring ability.

Admar Jaramillo, Cardinal Spellman – A wiry lefty guard who has good quickness and burst off the bounce, Jaramillo was consistently able to get by his man. With a jumper to match, he has all the tools offensively, and now must work on building up his body and utilizing his quickness defensively.

Johnny Ortiz, Brighton – What he may lack in size he makes up for with heart, quickness, and toughness. He scraps for everything and makes life difficult for opposing ball-handlers on the defensive end. Offensively, he’s able to get just about wherever he wants and shows good judgement with his shot-selection and passing choices.

Melvin Floyd, Windsor – The latest in a long line of talented and well-coached guards to come through the Windsor program, Floyd demonstrated that typical Warrior toughness. He was aggressive on both ends and one of the best perimeter rebounders in the entire field.

Brian Noone, Fairfield Prep – In showcase style settings it is often the guy who knows how to play, not the guy forcing his individual offense, that stands out. Noone was that guy at the Elite 75 as his decision making, unselfishness, and basketball I.Q. were all evident.

Damian Pantoja, Maloney -  Another star guard from the CIAC, Pantoja is a slashing scorer with the potential to play multiple positions on the perimeter and create his own shot from various spots on the floor.

Matthew Chang, Marianapolis Prep – A good sized guard, Chang stood out with his understanding of the game. His feel for offensive spacing was beyond most others while he had the complimenting I.Q. to match. In short, it was clear he “knew how to play.”

Kingsley Cockburn, East Hartford – He’s strong, tough, and an absolute mismatch on the perimeter. There were few defenders he couldn’t overpower and the fact that he didn’t take a play off all night long only added to his physical effectiveness.

Khaylen Mahdi, MacDuffie – He’s an energy giver who plays hard, creates tempo, and requires others to keep up without needing to say it out loud. He played with tough, was scrappy defensively, and was also capable of knocking down open shots.

Johnathan Mola, Redemption Christian – Mola has a broader build in the backcourt that he utilized to hold off defenders to establish his angles. He’s crafty with the ball in his hands and also a willing passer who swings it from side to side.

John Coleman, Watkinson – A quick guard who was effective in the open court, Coleman handled the ball better and had a nice pull-up game as he got to his spots quickly, stayed lowed, and elevated into his stroke.

Connor Buckley, South Portland – An intelligent player with a well-developed handle, Buckley has a true weapon with his crossover dribble that allows him to get to the rim with ease.

Justine Vine, Mansfield – He was another of the top shot-makers in the field who was also willing to play hard and sacrifice his body by diving on loose balls and being scrappy defensively.

Petey Galango, Wilbraham & Monson – The incoming post-grad was one of three members of last year’s Trinity Catholic squad to shine here. Galango is versatile with a reliable stroke and capable playmaking tools alike.

Taber Gates, Westerly – He’s a solid piece because he’s a ball-mover and open-shot-maker and while that may not jump out at you in a showcase setting it’s a recipe that translates to the next level.

Neville Lee, MacDuffie – Lee was skilled with the ball. He shot it well off the catch and the dribble and had the ball on a string with his handle, mixing in some high level passes as well.

Laqu Howard, Hyde – He was a ball-hawk defensively who was able to stand out on that end of the floor. His quick feet were also an asset offensively where he showed great speed with the ball.

Julian Howell, Middlesex – Howell was one of the better drive-and-kick style playmakers in the field. He has good foot speed on both ends, was effective with his dribble penetration, and often able to collapse a lane.

Pharoah Davis, Barrington – A quality point guard prospect who is both physically strong as well as a good athlete, Davis made good decisions with the ball while in attack mode.

Jeremy Remigio, Central – A match-up problem in the backcourt who uses his size to overpower opposing guards, Remigio is physical on both ends and a crafty scorer of the basketball.

Mariano Rodriguez, Burlington – He was strong attack the rim as well as passing off the dribble and also able to connect with his jumper from behind the arc.

Mike Coogan, Barrington – He was a solid point guard who showed good vision, played off two feet in the lane, and was pesky on the defensive end.

Samuel Adeusi, Holy Name – One of the younger players in the field, this rising junior point guard more than held his own thanks to his quickness, floor vision, and some high level assists.

Marc Dolgin, Milton Academy – Another rising junior, Dolgin continues to establish his jump-shot as an increasing weapon. Combine that with his competitiveness and passing and he’s always effective.