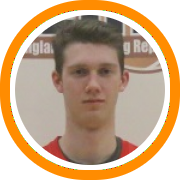 After dealing with a back injury that kept him out of the spring and summer AAU circuit as a junior, Ryan ONeil, a product of The Hotchkiss School in Lakeville, Connecticut, has bounced back and gained momentum coming into the Elite 75 Academic Showcase at the MPlex in Mansfield, Massachusetts on Sunday. O’Neil credits his strong work ethic and attention to detail for his strong return off the injury. “After the injury, I really tried to just recover as fast and efficiently as possible cause I know how big of a period that was for recruiting.”

O’Neil is coming off one of his best seasons as a high school player. The seventeen point a game scorer and senior co-captain helped lead the Bearcats to a 14-9 overall record. Ryan received All-New England third team honors in his final year at Hotchkiss as well.

Ryan relies on a very versatile offensive skillset to make an impact on the floor. At 6’5”, he can use his height advantage to score over smaller defenders, but also has the shooting ability to bring taller defenders out to the perimeter. He credits his shooting ability as well as his understanding of spacing and positioning on the offensive end for his great stat lines this past high school season. O’Neil also can run the floor extremely well, and his great basketball IQ on the offensive end translates to the defensive end of the floor as well.

On Sunday, it was clear that O’Neil was one of the most improved players in New England’s 2018 class and deserving of the late scholarship level attention that he has generated.

Here’s a look at some other unsigned seniors who impressed:

John Coleman (Watkinson) – The Windsor, Connecticut native has narrowed down his list to six well-recognized boarding schools in the New England area as he plans to prep to 2019. A natural leader and multi-dimensional floor general, Coleman is looking to develop more physically as well as gain the extra year of experience at the Prep school level. Coleman has nailed down his list to the Gunnery School, The Knox School, and Putnam Science Academy.

Jordan Davidson (Piscataway, NJ) – This New Jersey product and class of 2018 member has narrowed down his list of prep schools to Tilton School, Phillips Exeter Academy, and Choate Rosemary Hall. As a young 17-year-old, Davidson shows excellent basketball IQ on the court that is complimented by an excellent offensive skillset. Davidson’s ability to finish around the rim and shoot the three makes him a threat all over the front court. The combination of his offensive game and a great motor on the defensive end of the floor, Davidson will certainly make any prep school coach feel happy to have him.

Gezani Artis (Metropolitan Learning Center) – Artis, a native of Clinton, Connecticut and a member of the class of 2018 is your non-traditional point guard. At 6’1” with a strong build, Artis has developed the ability to post up smaller matchups. After bouncing back from a meniscus tear his junior year, his high basketball IQ and natural leadership on the floor propelled him to a successful final campaign at Metropolitan Magnet School in Bloomfield. Artis is hoping to do a post graduate year at Choate Rosemary Hall next year.

Praphas KC (EO Smith) – A natural leader, hard worker, and great teammate; these three traits best describe Mansfield, Connecticut native Praphas KC. As a member of the class of 2018, Praphas is planning to go straight to college next fall, in hopes of attending Emerson College in Boston, MA.  Along with the fact he is a strong student and great kid, he is a terrific shooter, something he credits to putting in countless hours during the summer too perfect.

Cathal Daly (Cape Cod Tech) – A Harwich native who will be deciding between attending Spire Institute in Ohio next year, or Mount Ida College, Daley displayed his team oriented style at Elite 75 Academic. He saw the floor well to consistently make the extra pass and find teammates through the day. His ability to shoot the three combined with his handle ability make him a great addition to a roster. He plans to work on his body this summer as well as his lateral quickness and footspeed to improve his all-around game.