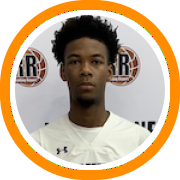 Ross is coming off a breakout summer which saw him go from under-recruited to having his choice of high-major scholarship offers in a matter of weeks. His ascension began at the NEPSAC Showcase in June and then continued through the EYBL in July where he joined Drive Nation from his homestate of Texas.

Ross first arrived in New England in the fall of 2020 as a reclassified junior at Cushing. While the pandemic prevented coaches from being able to see him compete live, he quickly developed a reputation for being a high-level athlete, but then had the benefit of using all of last year to further develop his skill-set and understanding of the game.

The benefits became clear in June as the southpaw's stood out in almost every game he played.

"Chase's development from last fall until his commitment yesterday has been nothing short of amazing," said Cushing Academy head coach James Cormier. "Arriving as an elite athlete with raw skills, he has improved footwork, changing speeds, creating for others and consistently finding ways to impact winning. In my opinion, there isn't a more gifted on ball defender in the region."

"The last 18 months have been a jounry. Chase has faced every challenge head on and I could not be more proud of his growth. He earned this opportunity and the best is yet to come."

Smart and assistant coach Cody Hatt, a New England native and the former coach at Vermont Academy, pursued him diligently for the last few months and recently hosted him for an official visit, all leading up to Friday's decision.

Marquette just landed a commitment from @CushingHoops & @DrivenationEYBL 4⭐️ guard Chase Ross @dtx_ross, who was a national stock-riser this summer.

Sound on for what he brings to @MarquetteMBB ����⬆️ pic.twitter.com/ku3HcKXzvf