Cushing Academy off to scolding start 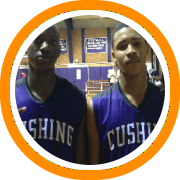 - After eight straight double-digit wins out of the gate (7 of 8 wins by 20+), Cushing Academy came into last night's home contest against Dayshon Smith and Putnam Science Academy looking to remain unbeaten.  And after a tight first-half, the Penguins indeed ran away from PSA in the 2nd-frame to win by a final score of 88-70 and move to 9-0 on the season.  With Andrew Chrabascz playing at about 75% with a tweaked hammy, the back-court of Jalen Adams and Kaleb Joseph picked up any slack by exploding for 54 combined-points to key the victory.  Adams was simply sensational, exploding for a remarkably efficient 34 points while also corralling a dozen boards and recording a quarter-dozen track-back above the rim blocks in defensive transition.  Meanwhile, Joseph shredded the PSA zone with the dribble, getting into the paint to create offense and score the ball at the bucket while knocking down shots off the bounce from both the long and mid-range to finish with 20 points and a generous handful of dimes...

Notes: The stock-riser of the year in New England to date, the offer list out on Jalen Adams is on the cusp of full-blown mutation.  High-Major offer #3 came last night from Kansas State after Assistant Coach Chris Lowery took in the ball-game in the Penguin Gymnasium.  As impressive as he was this summer, (when he earned his initial pair of offers from UConn and Provience), the highly-explosive combo-guard guard is now playing at a whole new level...Kaleb Joseph has also seen his recruiting stock rise through the season's first stretch as he was featured as such on ESPN earlier in the week and yesterday took several phone calls from Duke Assistant Coach Nate James...Despite playing with far-less than a full-motor, Chrabascz still managed to record a double-double and was outstanding starting the break with quick and precise outlets to streaking teammates off the defensive glass...Got to be very impressed with the type of selfless basketball Barry Connors' has his squad playing out of the gate...Despite being harassed throughout the game by a deep and feaist Penguin guard stable, Smith chalked up the scorebook for PSA and had several stretches during the game in which he was unconscious.  Southpaw shooter Jonte Rutty was also very effective for PSA as he drilled a a bunch of trey-balls at a high-percentage while big-man Paul Brooks looked good scoring the ball in the paint...Bentley is getting a terrific player in Cushing combo-guard Matt Barr. He shoots it, handles, defends, provides toughness, and plays crisp team ball which raises the game of his teammates.  I hope Adams and Joseph are carrying this kid's tray to the spot in the CAF 'cause Barr is acing them out in the back-court.  Casey Woodring and Chris Mullin Jr. have also been impressive in that regard and last night, Mullin was very effective scoring the ball from deep and distributing...Cushing Academy will get yet another boost this week with the return of Idris Taqqee, who transferred out of Cushing following last season but has now returned for the beginning of second semester...Check out the most recent Jalen Adams highlight video care of 2eZ videos: