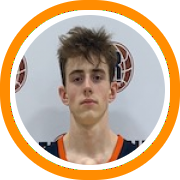 The Open Gym Series wrapped up last weekend with stops in Connecticut and Massachusetts on Friday and Saturday respectively.

Here’s a look at those young up-and-coming prospects.

Keyshawn Mitchell, Capital Prep – He’s the type of long-term prospect that jumps right out at you. A big, 6-foot-7 wing who really hasn’t even begun to grow into his body yet but has positional size, length, shooting touch to develop, and obvious raw ability. He was definitely the most intriguing long-term prospect of the underclassmen in the field.

RJ Delahaye, Storm King (NY) – He’s not yet overly assertive but Delahaye has both a skill-set and body type that project out long-term. He shoots it extremely well from behind the arc, not just in rhythm, but also with a special ability to make tough shots at a young age. He has big hands and long arms that suggest his frame has more growing to do.

Aidan Duffy, North Kingston (RI) – The 6-foot-6 forward has played the majority of his career inside thus far, but showed the tools to gradually expand his face-up game to the perimeter. He’s starting to put it on the floor some and has a decent touch to develop.

Johnny McCain, Trumbull – McCain is small but very skilled. He shoots a very good-looking ball and was able to get it off as well. Overall, he’s a very likely growth spurt away from being a serious college prospect.

Carson Benigni, Hamden Hall – “Jackson’s little brother” began the process of making a name for himself on Friday, albeit with a style that is reminiscent of his big brother. He is skilled with his jumper but still aggressive with a scoring mentality, despite the fact that he hasn’t filled out yet.

Michael Feroci, St. John’s Shrewsbury (MA) – He’s a utility guard right now who plays hard and is a bit of a jack-of-all trades. However, he has pretty good early size and a frame that looks like it could have a few more inches in it, so there’s definite upside in front of him.

Quincy Ferguson, Capital Prep – Ferguson has a strong body at an early age and correlating willingness to play physical. He consequently plays bigger than he is inside, but can also step-out and make open shots. As he continues to develop his ball-handling skills, he has a chance to develop into more of a power guard.

Tyler Callahan, Hamden Hall – Another talented young prospect for the Hornets, Callahan is an emerging wing prospect who already has good size and a solid, 6-foot-3, frame to produce both around, and going to, the basket.

Rhodia Perry, New London Sci Tech – He started to make a name for himself earlier this fall with a solid showing at the Elite 75 Frosh/Soph and backed that up again here. Perry’s defining characteristic is his jumper at this point, but he can also handle and pass the ball capably.

Ben Brochu, South Windsor – His I.Q. stood out, especially for an underclassman. Not unlike other young guards in the field, Brochu was skilled but still physically undeveloped. What differentiated him though was his willingness and ability to see the floor and share the ball.

Mekhi Johnson, South Windsor – A bulldog guard who is undersized but compact and strong, John’s low center of gravity provides him with the leverage to play through contact as well as the ability to get under opposing players on both ends of the floor. He’s also a consistent shooting threat.

Favour Okeke, East Hartford – A long and wiry 6-foot-3 wing in the making, Okeke looks the part of someone who still has some growing to do. He’s not resting on his upside though as he plays with a high-motor and infectious energy level that allows him to impact the game on both ends.

Matt Lamy, Bow (NH) - One of the top New Hampshire natives we’ve seen so far in the class of 2022, Lamy has good size and versatile tools on the wing. He plays hard, isn’t bothered by contact, and yet hasn’t filled out his wiry frame yet. He’s also a solid athlete with a stroke that should keep coming on.

Peter Bergeron, MacDuffie – One of the first young players to stand out on Saturday, Bergeron quickly differentiated himself during skill work as he shoots an extremely soft natural ball. A coach’s son, he has the basketball I.Q. to match along with long legs and big feet that suggest he’s just going to keep growing.

Andrew Ciaglo, Hopkins Academy - He caught our eye with his skill set and three-point stroke at that Elite 75 Frosh/Soph and showed added dimensions here with a high basketball I.Q. and feel for the game. Ciaglo understood spacing, moved the ball precisely, and held his own against older and stronger players.

Jeremiah Dorsey, MacDuffie - A young and still undersized lead guard with playmaking tools and instincts that are on the rise, Dorsey was shifty changing pace off the dribble, able to stop on a dime for his pull-up, and create for both himself and others. As his body catches up, his game will only continue to ascend.

Jayden Ndjigue, Bromfield - A crafty scoring guard with a lot of upside to his game, Ndijigue has a good frame to keep filling out and raw offensive talent that should keep working its way to the surface in the coming years.

Todd Brogna, Algonquin - Brogna has grown an inch or two since last season and looks poised to take on an even bigger role for Algonquin this season. He rebounds it well, has the size to play in the post, but the touch to eventually extend his game away from the paint.

Dante Velez, North Haven – He was giving up notable size and weight in virtually every match-up but Velez shot the heck out of the ball, was sneaky good finishing plays around the rim, tight with his handle, and had an overall feel for the game that came through as well.

AJ Miles, Longmeadow – It’s not easy for young playmakers, who are used to having the ball in their hands, to standout with less volume among older kids, but Miles had some very impressive moments, both in the initial drill portion of the night and then in the underclassmen game, where he showed both his floor vision and creativity with the ball.

Kailen Aaron, Sci-Tech – A slashing wing who puts it on the deck effectively, Aaron had his fair share of impressive moments as well but also stood out with his mature overall approach and strong work-ethic.

Austin Hunt, St. Mark’s - He has terrific positional size for his age and an advanced feel for the game as well. He is fundamentally sound, passes with good touch, and has rotation on his stroke to match. Overall, he stood out as a youngster with a bright future.

Ethan Murphy, Champlain Valley - The freshman made the trip south after missing the Vermont Open Gym and made it worth his while as he stood out with his skill level and virtually pure jumper.

David Ayles, Nobles - The true freshman has been on our radar since his middle school days, and he has continued to grow and develop new areas of his game