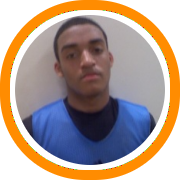 The Connecticut Elite AAU program held an open workout at Wilbur Cross High School in New Haven, Connecticut on Monday night.  21 college prospects from the program participated with even more college coaches, along with the New England Recruiting Report, on hand to take in the action.  Here's a look at who impressed:

James Jennings, 5’9”, 2012, PG - Jennings looked as good as ever on Monday. He is a complete player who shoots, dribbles, and passes well. At the workout he was the quickest player on the court, and was able to run his team very effectively in transition. Despite his breakneck pace, he was consistently able to make the correct play, whether that be finishing the break himself, or dumping the ball off to a running teammate. In the halfcourt, Jennings was just as devastating to his opponents; his shooting touch is deadly, and he was able to knock down 15’ jumper after jumper off the dribble, as well as from behind the 3 point line when left open. Despite his size, Jennings looks ready for the college game right now.

Billy McDonald, 6’7”, 2012, SF/PF - A somewhat new name on the scene, McDonald made good use of the workout to insure that his anonymity would not last long. McDonald is a long, tall player with a fantastic leaping ability; a dunk he attempted during layup lines was the highest anyone at the workout jumped all night. McDonald shot extremely well in both drills and scrimmages, netting several threes in 5v5 play and scoring constantly from midrange. He is a very good bank-shot shooter, and seems to prefer using the glass anywhere on the wing within 15 feet. McDonald will be best utilized as a 6’7” small forward, a concept that will likely get many college coaches drooling, and he will definitely be on the radar in the upcoming weeks.

Pat Hopkins 6’8”, 2012, C - Hopkins showed good touch around the hoop, and used his height well to score easily over smaller defenders. Hopkins was comfortable shooting out until the 17 foot range, and his shooting form is more fluid than you would expect from a center. His left hand could have been stronger, and he sometimes seemed lost offensively, but once he develops these skills more, he has the potential to be quite a special player.

Jerrell Smith, PG/SG - Smith shined during drills and had 2 notable blocks during the 3-on-2, 2-on-1 drill. Although small, he is an aggressive and tenacious defender with an excellent sense of timing that hounds his opponent relentlessly. During the 1v1 dribbling drills, Smith’s opponents were constantly losing the ball.

Chris Watts Jr. 6’5”, 2012, SG/SF - Even though Watts shot very well on Monday, he seemed to lack confidence. There’s a lot to be confident about if you’re Chris Watts Jr. however, because Watts has an incredible wingspan and is a consistent shooter who scores without dominating the ball at all.

Kyle Holmes, 6’2”, 2012, SG - Holmes was an effective penetrator at the workout. He scored in a variety of ways, including several drives where he infiltrated the defense very intelligently, and a handful of converted threes. Although his elbow sometimes strayed on his jump shot, the ball always left his hand well.

Antawn Boyd, 6’2”, 2012, PG/SG - Boyd showcased his natural passing ability during the workout. On one of the several spectacular passes he converted, he threaded the ball in transition through a hole between two defenders barely bigger than the size of the ball itself. He was also very present on the boards. He is a strong and athletic player with great court vision.

Kadian Hall, 6’1”, 2013, SG - Some players just have the look and feel of a scorer and that’s certainly the case for Hall.  So although he had a rough shooting day, it was still clear that he knows how and where to be open and get his shot off. Look for him more this summer.