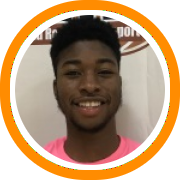 Coppin State University has developed a sudden recruiting pipeline into the New England region, and the state of Connecticut in particular.

Less than one week after former Maryland star and longtime NBA player Juan Dixon was named the program's new head coach, the Eagles have come into the Nutmeg state and landed a pair of quick commitments.

The first came from longtime Weaver High School star and Putnam Science Academy post-graduate KeAndre Fair who took to his twitter account to announce his commitment.

The second was from St. Luke's School guard Joel Boyce, who also announced his commitment via his twitter account.

Fair, who played with the Connecticut Basketball Club throughout his grassroots career, had  one of the most decorated high school careers in recent CIAC history. He played in four consecutive state championship games, won a state title in 2015, and a pair of CCC championships. He was also named first-team All-State for all four years of his high school career, is a three time All-CCC selection, a two-time New Haven Register first team All-State selection, and the 2015 Hartford Courant Player of the Year. He is Weaver High School's all-time leading scorer with over 2,000 career points, their all-time leader in made three-pointers with over 200, and their all-time leader in games played with 110.

At PSA, Fair initially struggled to establish a niche but predictably ended up carving out a critical role for the Mustangs, emerging as the team's starting two-guard for the second half of the season, as they won the Power 5 Conference Championship and returned to the field of the National Prep Championship.

What has been perhaps even more impressive though is the way in which his game has evolved in that time. Initially, a power wing player who was at his best absorbing contact and attacking the basket, Boyce gradually became more of a true big guard who was consequently able to create constant mismatch problems with his size and strength in the backcourt.  He's learned to play the game at a higher level intellectually and become a valuable distributor and passer in the process.

In there lies an added bonus for Coppin State. Fair and Boyce don't just bring winning pedigrees, but compatible games. Fair is a scoring guard whose ability to make shots in bunches, especially in timely moments, has always been his trademark. Nevertheless, he's not a true point guard. Boyce is now versatile enough that he can be a team's primary ball-handler and distributor, but maintains the size and strength to defend multiple positions. In tandem, those styles make an ideal fit and also afford Dixon the flexibility to pair them with any other type of perimeter player, whether it be a smaller attacking guard or a bigger wing.

One thing is for sure, Coppin State suddenly has a recruiting presence in the New England region that we have not yet seen before.