Clayton Claims His Spot in the Big Ten 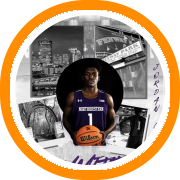 Clayton began his high school career at Lexington Christian Academy. He had an impressive 2019-20 season for the Lions. Clayton helped them earn the top seed in NEPSAC Class C and was a member of the All-League team.

Like the majority of New England prospects, the COVID-19 pandemic took away his junior season. This led to Clayton deciding to transfer to BCA and reclassify into 2023.

His first year was a success at BCA. He earned Honorable Mention All-NEPSAC Class AA, helping the Sentinels make it all the way to the championship game.

Clayton really began to rise when his AAU season began in the spring. He was the floor general for a Mass Rivals team that went 15-4 in the Adidas 3SSB regular season and finished off the July live periods winning the 3SSB Open Championship in Los Angeles, California. Clayton proved to be one of the top facilitators on the Adidas circuit as well, averaging 5.2 assists per game.

“I have been fortunate enough to coach Jordan as a player at BCA and as a member of the Mass Rivals since middle school,” said BCA & Mass Rivals head coach Vin Pastore. He shot lights out this spring and summer, expanded his game to become a better finisher off the bounce, become an elite level point guard who makes all his teammates better, all while defending at the highest level with off the chart intangibles.”

“Jordan is the highest character kid along with the highest level student you can find. He embraces work both in the classroom and on the basketball court. On the court he is feisty and tough, but off it as well mannered and courteous a person as you will meet. His accomplishments reflect what the Prep School and Grassroots basketball mission is all about, using the ball to get the best education (top 10 in the country in this case) money can buy, yet all for free.”

Clayton becomes the second member of BCA’s 2023 class to finalize their college plans.