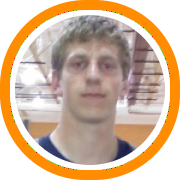 In a rematch of a double-overtime thriller in mid-February in which top-seeded Salisbury escaped with a 76-72 victory on Choate’s home floor, Class A’s title would be blown open early by a devastating display of perimeter shooting from Choate’s loaded backcourt of three-point specialists.  With Yale-bound forward Brandon Sherrod (nine points) on the bench early with two fouls, Wallingford-native and Sacred Heart commit Phil Gaetano would knock down back-to-back threes and ignite a furious barrage of three-point bombs from the likes of John Papale, DeShawn Murphy, Casey Woodring, Dennis Levene and Gaetano that would extend over a 28-3 run in the closing minutes of the first half and give Choate a commanding, 51-23 lead heading into the break.  While Salisbury would come out inspired in the second half behind the attacking play of Quinnipiac-commit Zaid Hearst and impressive 2014 forward Chris McCoullough, Choate would continue its hot shooting from behind the arc, and, with Sherrod back on the floor to control the glass and score the ball inside, the Wild Boars would eventually cruise to an easy, 81-56 victory and capture their first ever New England Championship.

Papale led all scorers with 27 points en route to Most Outstanding Player honors, with Gaetano (four threes) and Murphy adding 17 and 16 respectively.  McCoullough finished with a team-high 14 for Salisbury, with Bucknell-bound Ryan Frazier adding 13 and recent Trinity-commit John Seltzer, who lit Choate up for 26 points in February, being held to just three points on one field goal.

Phil Gaetano (Choate): “After our loss to Salisbury earlier in the season when we felt they stole one from us on our home floor, we prepared everyday in practice with the mentality that we were going to have a chance to see them again today in the finals.  We have a lot of respect for their players and wanted to focus defensively on preventing them from getting clean looks from the perimeter and driving the ball into the paint.  Offensively, it’s easy for me being surrounded by so many talented players and, today when I saw Salisbury really paying attention to my teammates early, I was able to step up and hit a couple shots to get us going and we were able to use that momentum to start making shots collectively and go on huge run that ultimately set us up to win the game.”

John Papale (Choate): “We just share the ball so well, that’s what we’ve been doing all season, and today we were fortunate to make shots.  We’re coached everyday to play the game unselfishly and that definitely showed today with how many guys were involved in stepping up and hitting big shots, especially in the first half.  Phil (Gaetano) sparked us early, Murph (DeShawn Murphy) and Casey (Woodring) hit a couple, I was able to make a couple, it was a true collective effort.  And defensively, we knew we had to really lock down and guard them on the perimeter with Brandon (Sherrod) out early with foul trouble, especially Jon (Seltzer), and I thought we did a nice job limiting the number of clean looks they got from behind the arc.”

As good of a pure shooter as there is in New England, the six-foot-three off-guard shook off a tough start and found a rhythm shooting the ball from areas all over the floor in Choate’s convincing win over Salisbury on Sunday.  Known for his ability to knock down shots in bunches from behind the arc, Papale (27 points) attacked close-outs and created space with a separation bounce to hit multiple mid-range pull-ups over an outstretched hand.  With Salisbury throwing multiple defenders at him and attempting to chase him off screens, he showed impressive vision in finding open shooters for clean looks on the back side of help and attacked the offensive glass for multiple put-backs in traffic.

An elite level, face-up four in the class of 2014, McCullough was one of few offensive bright spots for a Salisbury team that struggled to create high-percentage looks on the perimeter against a committed, hand-in-your-face Choate defense.  With a pure perimeter stroke and the length and athleticism to score the ball over people around the rim, the six-foot-eight, hybrid forward will only continue to improve as he adds some muscle to his slender frame and develops a willingness to put the ball on the floor and engage contact to score in the paint.