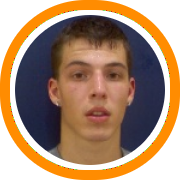 Colgate head coach Emmett Davis came into Connecticut to get a commitment from Choate Rosemary Hall’s Patrick Liengueu, a 6’3” swingman originally from the country of Cameroon.

Liengueu first came to the United States just a few years ago when he enrolled at the Miller School in Virginia, which owns one of the top high school basketball teams in the country.

This July he played with the East Coast Fusion AAU program at the Harley Davidson Triple S Classic, but for the most part spent the majority of his summer working out with other Cameroonian players, most notably UCLA’s and the Milwaukee Buck’s Luc Mbah a Moute.

Consequently, when he arrived at Choate to begin the school year in September, he was a player still falling very far under the radar.  But his reputation grew quickly as over 15 coaches made stops in the Choate gym to see him play this fall.  One of the very first was Nathan Davis, a longtime assistant coach at Bucknell, who recently made the move to Colgate.

Davis had seen Liengueu play in West Virginia and was already well aware of his achievements both on the court and in the classroom.  It wasn’t long after that head coach Emmett Davis was in the Choate gym and then that Liengueu was on the Colgate campus for his official visit last weekend.  Two days after returning from his visit, Liengueu contacted Coach Davis and told him he wanted to become a Raider.

Colgate is coming off one of their most successful seasons in recent memory as they won 18 games and advanced to the finals of the Patriot League tournament.  But in the 10 years that Davis has been at the helm the Raider’s program has been one of the conference’s most consistent finishing with a .500+ record or advancing to the semi-finals in 8 of those 10 years.

Liengueu is the first division I basketball player to come out of Choate Rosemary Hall in recent years.  The school, widely known as one of the best academic high schools in the country, has been consistently improving their basketball program in recent years as they have produced guys like Conor Meehan (Amherst), Kyle Kesses (Emerson), Nick Justiz (Vassar), and Mike Ryce (Maine-football).  This year they return junior point guard Luke Matarazzo along with senior shooting guard Phil Opamuratawongse as they join with newcomers Liengueu, C.J. Ruskay, and Tom Piscina to form a squad looking to make some noise in the newly formed Western New England Athletic Association.