CBC Takes u13 Championship at NEHF 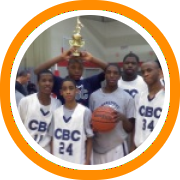 The Connecticut Basketball Club had few problems reaching the finals of the Northeast Hoops Festival and fewer problems dispatching of a talented ANU Generation team 63-30 in the championship game.

Thomas Jackson led the way for CBC as the guard was on fire from downtown, draining seven three-pointers for a game high 26 points.

Ashon Avent led the way on the interior as the forward scored 17 points while being relentless on the glass and equally impressive on the defensive end.

KeAndre Fair and Blair Howard were both important contributors in the backcourt as Fair scored nine points on a series of dribble drives while Howard shot the ball well throughout the tournament while also locking up defensively.

Eric Crawford was another guy who made opponents pay for leaving him unguarded around the three-point line as he served as the team’s zone buster throughout the weekend.

Horace Rowe and Tyrique Jones played an equally important role along the frontline as Rowe is a powerful young player who just started playing the game at the competitive level and is already a fantastic rebounder while Jones contributes more size to the front line and is especially effective on the defensive end thanks to his shot blocking.