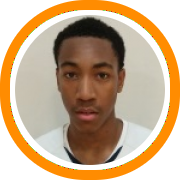 Nichols College landed an important piece in their 2016 recruiting class over the weekend when Canterbury School post-graduate guard DeAnte Bruton came on board.

Bruton previously starred at Ledyard High School before graduating last year and opting for a post-graduate years in hopes of building up both his body and his recruitment.

He put up huge numbers against some of the top programs in New England this year as the slippery southpaw proved that he was capable of scoring points and making plays at the highest of levels.

He went on to earn First-Team All-New England honors in Class B of the NEPSAC and also generated interest from both division I and II programs along the way.

At Nichols, he should have an opportunity to step right in and play immediate minutes and assert himself as an offensive weapon from day one.

In other recent commitment catch-up news:

- Wilbraham & Monson Academy’s Julian Alexis committed to Babson a few weeks ago, adding to what is a strong spring class for the 2015 Division III national champions. Alexis is a versatile swingman who can play multiple positions and also pose a threat from behind the three-point line. He visited Babson back in November and the Beaver coaching staff continued to pursue him throughout his post-graduate year until his decision became official a few weeks ago;

- South Kent School post-graduate Ty Dalton is headed to the University of Akron next year. Akron is a division I school competing in the MAC (Mid-American Conference). They finished this year with a record of 26-9 advancing to the MAC finals before falling to Buffalo 64-61 and thus just missing out on the NCAA tournament. Dalton is a highly versatile 6-foot-5 jack of all trades who played as many as three different positions this year for South Kent. He is both a good outside shooter as well as a heady player.

- Boston College High School star Jack Loughnane is heading to Saint Anselm College next year. Loughnane is coming off a huge senior season that saw him earn numerous accolades including being named to the Boston Herald Dream Team and an All-Star in the Catholic Conference. He also scored his 1000th point this year. The son of B.C.H.S. coach Bill Loughnane, Jack is as heady and tough as you would expect from a coaches son and should be a good fit with the Hawks.

- Bridgton Academy post-graduate and Andover High School alum David Giribaldi will head to SUNY Purchase next year to continue his career in the Skyline Conference. A scoring guard is know for his ability to put points on the board in bunches, Giribaldi had a decorated high school career in the MIAA and then proved himself in the nation’s top post-graduate league, AAA of the NEPSAC this year. He was also the valedictorian at Bridgton and plans to major in Playwriting and Screenwriting in college.