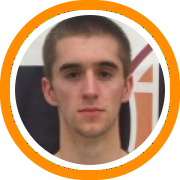 Matt Mobley, 2013 (Worcester Academy) – Matt is an exceptional athlete with wiry strength and long arms. He has a nose for the ball, can rebound at a high rate for a guard, and has very deep range on his three-point jumpshot. He spent his high school career playing at St. Peter-Marian, and will take his legitimate division 1 talent to Worcester Academy next year to play for Jamie Sullivan.

Colin Richey, 2014 (Choate Rosemary Hall) – An underrated athlete and proven playmaker, Colin was one of the top players in Massachusetts this past year, leading Whitinsville Christian to a third consecutive central Mass. championship. He has greatly improved his ball handling and outside shooting, as clearly displayed at Flight School. Colin is playing with Rhode Island Hawks this July and will go on to Choate Rosemary Hall next year.

Richard Santos, 2014 (Whitinsville Christian School) – The next point guard in line at Whitinsville Christian, Santos is a standout one-on-one scorer who has the innate ability to create offense. His outside shot has improved, he’s a very good ball handler, and all that ability will enable Richard to be one of Whitinsville’s go-to scorers this coming year.

Nick Pasquale, 2014 (Shrewsbury) – Pasquale is a 6’8 big man who is still a very raw prospect. However, this is a player who has a high basketball IQ, which was seen in how well he rebounds, moves without the ball, and runs lanes in the open floor. His low post offensive game is still in the developing stages, but a big man with a high IQ who is a solid athlete is hard to come by – college coaches should certainly keep an eye on his progress.

AJ Brodeur, 2015 (Algonquin) – Brodeur is 6’6 and one of the most skilled young bigs in Massachusetts. One look at him clearly shows that he’s been working hard in the weight room, so combine that with his athleticism, footwork, and scoring ability and he is an intriguing college prospect. He still has plenty of time to grow and will no doubt be a breakout star at Algonquin this coming season.

Tom Annan, 2014 (St. Peter-Marian) – Annan is a relative unknown prospect right now because of the talent that SPM had at guard last year, but this coming season he will have a lot of responsibility for the Guardians. Annan is a quick, gifted guard who has the basketball IQ to run an offense and the physical ability to create offense for himself and others in the open floor.

Dave Mercier, 2013 (Milford) – A legitimate 6’6 forward who can really shoot it well, Mercier stands out because of the versatility in his offensive game. He can score from the lost post or from mid-range, but Mercier can also stretch defenses with his range. He’ll be looked to to be one of Milford’s go-to guys this coming year, and if he is up to the task the Scarlet Hawks could win a lot of ball games in a very wide open Division 1.