Brown best thing that could happen for Daughtery 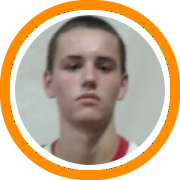 The six-foot rising junior emerged as a prospect on the rise last spring and summer, catching the attention of a variety of Ivy League schools.

Despite that early interest, it wasn’t until six days ago, after Martin and associate head coach T.J. Sorrentine watched Daugherty drop 28 points in a win over Mount Pleasant, that the Bears became the first division I school to extend an offer.

“I’m beyond thrilled and really excited to be part of their program,” he told the New England Recruiting Report.  “Being so close, I’ve been familiar with their program for a long time but this is the best thing that could happen to me so I’m really really excited.”

While Daugherty is best known as a pure point guard who is able to run the show and make those around him better on the AAU circuit, more of his individual offense tends to come out during the high school season.

“I like to have that ability to hit the pull-up jump shot or take it to the basket,” he said.  “A lot of times on my high school team in order to get other guys looks I have to be more aggressive.”

Below are some of Daugherty’s most recent highlights: