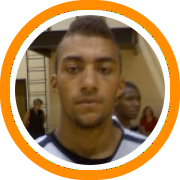 Denzel Brito was a busy man during the first ten days of the July live period.  In fact, he didn’t take a day off.

From July 5th – 8th he was in Cincinnati with his New England Playaz team at the Adidas It Takes 5ive Classic.  After catching a flight home on the night of the 8th, the Playaz practiced on the morning of the 9th and then headed over to the Elite 75 Showcase, where Brito made the all-star game.  They won three games on the 10th to take the title at the First Eight Tournament, then played in the Hoop Hall National Invitational on the 11th & 12th and the Super 16 Showcase on the 13th, before flying to West Virginia first thing in the morning on the 14th for the Triple S Harley Davidson Classic, which didn’t wrap up until the 16th.

While most players would have worn down playing a schedule like that, Brito actually got better as the period went along.

“I started off a little sluggish but I picked it up towards the end,” Brito said.  “I started to play well in Springfield and kept it going after that.”

Going into the month, most college coaches already knew that Brito could make plays off the dribble and get to the rim, but the fact that he shot the ball so well during the last few days of the period was no doubt a big boost to his stock.

Now the Lawrence Academy guard claims offers from Fordham, Delaware, Georgia Southern, Harvard, Bucknell, New Hampshire, and Niagara while he also lists VCU, Davidson, and Stanford among the schools who have expressed an interest.

“I don’t really have any favorites right now,” he said.  “I’ve only visited Fordham and Stanford, so I’m going to wait until the fall and take all of my visits.”

Brito also wants his entire focus to be on the upcoming second half of the live period, when the Playaz will first travel to the Adidas Super 64 Tournament in Las Vegas and then the Best of the Summer Tournament in Los Angeles.

“I think I have played pretty well so far,” he said, “but I’m looking to pick it up even more for Vegas.”