Brewster Tandem off the Board 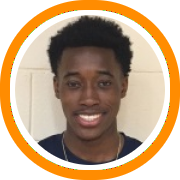 A pair of Brewster Academy teammates committed to high-major schools within an hour of each other on Thursday night.

First came Michael Okauru, a true senior from Raleigh, North Carolina who pledged to Florida following his official visit to their campus earlier this week.

Next was Curtis Haywood II who gave a verbal commitment to Georgia Tech.

Both players have exceeded expectations since their arrival at Brewster this fall and are instrumental to the team's undefeated start through the holiday break.

Okauru is an athletic 6-foot-4 combo-guard who has a very high ceiling on both ends of the floor. He's shown flashes of being a big playmaking guard, has made notable improvements in his jump shot, and is undeniably talented on the defensive end as well as a good rebounding guard.

Haywood has been an especially impactful contributor for the Bobcats in the first five weeks of the season. Known for his toughness and his versatility upon his arrival, he has been as good as advertised in both areas, but has also proven to be a higher level perimeter shooting threat than initially anticipated and so more of an offensive weapon. His greatest attribute though may be his toughness and so he is a good fit next to Christ the King (NY) point guard Jose Alvarado, who signed with Georgia Tech in November.

Below are highlights of both players from the recent National Prep Showcase care of the itsovertime app.