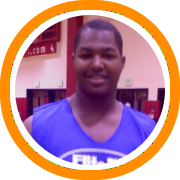 Markus Kennedy will be spending one more year at the Winchendon School before heading to Villanova, Winchendon head coach Michael Byrnes confirmed this week.

Kennedy, a six-foot-nine two-hundred-and-seventy pound center, committed to Villanova almost exactly a year ago during his junior year at Living Faith Academy.  He made the decision to transfer to Winchendon later last summer and was an important part of a team that advanced all the way to the NEPSAC finals this season.

While Kennedy will be returning to Winchendon next season, he still plans on heading to Villanova in the fall of 2011.
Kennedy is a widely skilled big man with a terrific ability to facilitate offense from the low post with his passing ability.  He has been running with the New England Playaz on the grassroots circuit this year and playing to rave reviews at his first two stops.

“I’ve always liked Markus,” Scout.com’s Dave Telep said after watching him at last weekend’s Real Deal on the Rock.  “He has great hands, was really good around the bucket, and was huge for them [Playaz] in the semi-finals.  I think that Markus Kennedy is going to end up being a very good basketball player.”