Best Before the Rest 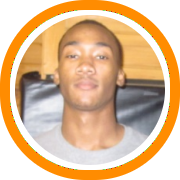 Identifying the best college basketball prospect currently playing in the state of Maine is no easy task.

Identifying the best college basketball prospect to come out of the state this year is far simpler.

Amir Garrett spent the first semester at Bridgton Academy before enrolling at St. John’s at the semester break.  An ESPNU 100 prospect in the national class of 2011, Garrett showed flashes of his tremendous upside during his short stay and has continued to prove his worth since debuting in the Big East.

Because it has always been NERR policy to include players who leave for college mid-year among their most recent class, Garrett remains in the top spot in Maine’s class of 2012.

Sorting things out after the former Bridgton star becomes a somewhat more tedious task as there are several players who could lay legitimate claim to the title.

Currently sitting in the second spot is Xavier bound big man James Farr, a skilled six-foot-nine southpaw from Maine Central Institute.  Bridgton’s remaining swingmen, Darrick Wood and Malik Nichols, check in at three and four respectively, as two long and explosive scorers at the wing spots.  We return to MCI to round out the top five with another talented big man in future Loyola Marymount center Tobe Okafor, a rapidly developing post prospect with huge upside.