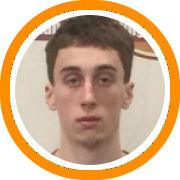 Geschickter began his career at Brookline High School before transferring into Williston Northampton last year, where he helped the Wildcats to a NEPSAC championship in just their first year in the Class A ranks.

He and his Williston teammates stuck together for the AAU season, forming a team called “We Will” and traveling up and down the east coast to play in top tier events.

With a pure shooting stroke, good size for his perimeter and the athleticism to match, Geschickter has always been an intriguing prospect, but he’s really managed to put it all together in recent months and take his game to new levels in the process.

He had a steady dose of division II suitors to start the summer at the Elite 75 College Showcase and built on that success at the BasketBull Rise Showcase during the July evaluation period, not only landing an offer from Bentley but also striking the division I radar for the first time.

Geschickter has made a pair of visits to Bentley’s campus in the six weeks since and decided he was ready to pull the trigger yesterday, committing to head coach Jay Lawson.

“I am really excited for Sam, his family and the Bentley program,” Williston Northampton head coach Mike Shelton said. “Coach Lawson is getting a high level shooter that only gets better every time he steps on the floor. As with all of our guys here at Williston, we look for the best academic and athletic fit. Bentley being a top 20 business school in the country is the perfect place for him to pursue both of his passions, business and basketball.”