Be Seen - New England Storm u17 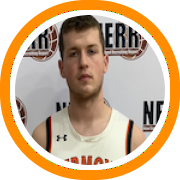 There was a time, not that long ago, when the New England Storm were producing prospects for every level of college basketball.

Georges Niang started his AAU career in a Storm uniform while they had a host of others who went on to play in the NE-10, NESCAC, and a variety of other levels.

More recently, they’ve been known for the sheer size of their program, with 60 teams ranging through New Hampshire and Massachusetts, but not necessarily the same caliber of college prospects atop the program.

Well, that is all beginning to change now.

It starts in the class of 2020, but gets better with each passing year (stay tuned to NERR later in the week for looks at their u16 and u15 teams).

Amidst the backdrop of COVID-19, the Storm have also been finding creative ways to get their rising seniors exposure with their Friday night showcase games, which have attracted a hotbed of college coaches to Derry, New Hampshire in recent weeks.

This year’s Storm team also has something they haven’t had in quite some time, a scholarship prospect.

Justin ONeill just wrapped up a highly decorated career at Bedford High School in New Hampshire, where he averaged 21 points and 8 rebounds per game as a senior. He’s now heading to the Tilton School for a post-grad year and the move back to 2021 seems to already being paying dividends as he’s attracting new interest from scholarship level coaches, despite the fact that they haven’t been permitted to get back on the recruiting trail yet.

O’Neill looked stronger, more explosive, and consequently more versatile than we had ever seen him before, while continuing to showcase the combination of size and skill that made him so intriguing in the first place.

�� is believing and there's no denying @NEStormBball & incoming @TiltonBVHoops Justin O'Neill has taken his game to new levels when you watch it in person. #BeSeen pic.twitter.com/E6enUzyHiu

Another player with a leadership role on this club who exceeded our expectations was St. John’s Prep point guard Aidan Callahan. We knew after breaking down his film for the NERR-TV Rising Senior Showcase, that he was a talented playmaker off the dribble, but what we got a much better appreciation for when watching him live was just how reliable he was running the team from the point guard position. He dictates tempo, doesn’t get ratted, gets others involved, and can make things happen when necessary.

Our Friday night with the Storm also introduced us to a handful of college prospects that we hadn’t yet seen before.

Tommy Fontanella was probably the most pleasant surprise. He has good size at 6-foot-4 and is a legit wing who moves well laterally, has a well-rounded skill-set, and knows how to share the ball and operate in offensive structure.

Nate Kane is another multi-dimensional perimeter player with good size. That wasn’t always the case, as he was known primarily as a shot-maker, but he’s worked hard to diversify his game and it’s shown as he was a threat to put it on the floor and also played with a high IQ.

Nate Kane (@@NathanK78866749) was just one of the new prospects we found when the #BeSeen Tour visited @NEStormBball pic.twitter.com/tDUhlnCxkH

Tewksbury’s Kalu Olu is the enforcer of the backcourt, with an incredibly powerful build that allows him to overpower virtually any guard he’s seen this summer. He too had a solid foundation of skill in his game and was reliable in offensive structure.

Windham’s Joey DaSilva is a scoring guard with a strong body. He approaches the game looking for his three-point shot, has very deep range, and utilizes the threat of his jumper to open up the rest of his scoring arsenal.

Bishop Guertin’ Dylan Santosuosso is another capable scorer and also one of the more improved players on the team. He can knock down open shots and also finish plays around the rim. Nashua South’s Cody Rocheleau missed the workout we watched with injury but is reportedly a solid two-way player who is both a capable scorer and pro-active defender.

What the team lacks, with the exception of O’Neill, is mush size up front. They compensate though with a handful of forwards and wings who all play much bigger than their actual size.

Methuen’s Andrew Lussier may be only 6-foot-2 but he’s strong, physical, and very smart. The southpaw can knock down open threes and is also an excellent team defender.

Lawrence High’s Gabe Zorilla is only 6-foot-3, but he’ll take defenders into the post, dig out rebounds, and figure out ways to finish plays around the rim. He always plays within himself on the offensive end is a strong on-the-ball defender as well.

Alvirne’s Liam ONeil is 6-foot-4 but he’s another extremely smart player. First and foremost, he knows how to use his body and create space. He has excellent footwork, soft touch around the rim, developing offensive face-up skills, and a ton of passing potential.

Collectively, under head coach Matt Regan, this is a group that has bought into playing together as a true team. They share the ball extremely well, run true offense, and play within structure on both ends. Whether or not they realize it or not, that’s going to benefit them all individually as they’re showing college coaches how they’re capable of contributing at the next level.