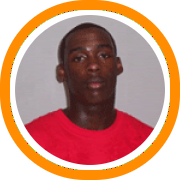 After earning several scholarship offers from top notch division II programs in the Northeast 10 Conference this Fall, Barry Latham was determined to prove that he was a division I player.

As it turns out he did exactly that, but ultimately still chose to attend Bryant College and play for the former UNLV Head Coach Max Good.

Latham had been generating some division I interest throughout the year but after a breakout game against St. Andrew’s and BC bound shooting guard Rakim Sanders the phone began to ring off the hook. Not only was Latham able to hold his own against Sanders but he brought his game to a whole new level showing his great mid-range game, shooting range to the 3-point line, and excellent defense due to his great length. Shortly after the game a variety of schools from the America East and NEC were disappointed to learn that Latham was taking his game to Bryant.

Latham has been a main staple of Head Coach Dave Vitale’s Marianapolis Prep team for a few years now. Last season, Latham helped the team to a season record of 30-6 on their way to the NEPSAC Class “D” title. This year MPS may have jumped two steps to Class “B”, but their winning ways have continued as they are again a contender for a New England Championship even while taking on the likes of South Kent, Winchendon, and Notre Dame Prep.

Next season, Latham will be joining another program with a winning tradition. Bryant currently holds a record of 18-9 as well as a mark of 14-8 in the NEC, arguably the strongest Division II conference in the nation. Additionally, Bryant has made three straight trips to the NCAA tournament, including a run to the national championship game in 2004.