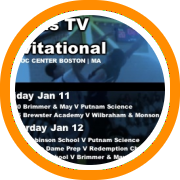 With the Ballas TV Invitational set to take place this weekend in Boston, Ballas TV has produced a seemingly endless stream of highlight videos to promote the prospects who will be in action this weekend.

Below is the official preview video of the event, which includes all of the top players making their return to Boston including the likes of Wayne Selden, Jared Terrell, Goodluck Okonoboh, and many more.

Ballas TV has also produced a variety of individual highlight tapes this week, promoting many of the participants in this weekend’s event.  Check out the NERR player profiles to see the videos for:

The event schedule begins on Friday as Brimmer and May takes on Putnam Science Academy at 4:30p.m. at the Kroc Center.  Brewster Academy and Wilbraham and Monson Academy will square off in the night’s main event, scheduled for a 6:15p.m. tip.

Putnam Science will return to the floor a day later to take on the Robinson School at 10:45a.m. followed by Notre Dame Prep against Redemption Christian at 12:30p.m. and then Wayne Selden returning to Boston to lead Tilton against Brimmer & May at 2:15p.m.