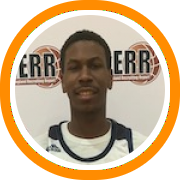 Both players had earned recruitment from the division I level over the course of the winter season.
Creek is a native of Australia who arrived in New England and graduated from Bishop Connolly High School in Massachusetts while playing his grassroots basketball for Coach Doug Alves, first with the Boston Bobcats and then with Team New England.

He landed an offer from Hartford last summer and picked up another offer from New Hampshire last month.
Creek is a highly skilled 6-foot-8 forward who shoots the ball at a high level and can stretch the floor. He’s a solid vertical athlete who plays hard and has begun to build up his body.

Creek is the second Williston Northampton product to accept a full athletic scholarship offer in as many weeks, following Wol Maiwen’s commitment to Maine.

"I chose Assumption because of the feel, I had visited the school and I really liked it," Creek told NERR's Zack Sandberg. "I watched them play that day as well and once I saw the difference in the culture that Coach Faucher had made, I felt like the Greyhound family might be in my future, which, sure enough it is."

Stevens graduated from Lincoln High School in Brooklyn last year and played his grassroots basketball with Born Ready Elite. He earned his first division I offer from UNC Asheville last summer but then brought his game to new levels this year after arriving at Springfield Commonwealth Academy.

The big, 6-foot-4, guard exceeded expectations from the start, as he stood out in fall open gym with his size, skill set, and feel for the game. He put up big numbers during the course of the season including a 28-point performance in the Power 5 Championship game in which he also knocked down five threes and added 8 rebounds.

Stevens versatility should be among his best attributes at the next level as his combination of size, skill, and instincts should allow him to play at least three different positions at the division II level.

Stevens is the third player from SCA’s 2020 class to accept a full athletic scholarship thus far but certainly won’t be the last.