All Academic Camp - Recap I 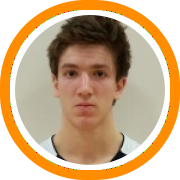 Waltham, MA -- Early July is an exciting time for all people involved with grassroots basketball. With the live period beginning and breakout prospects anxiously awaiting their time to make a name for themselves with college coaches, there is a buzz unlike any other time of the year.  In New England, the Hoop Mountain All-Academic Camp has served as the unofficial tip-off to this crazy recruiting season. Held annually at the beautiful confines of Brandeis University, there seems to be a deeper talent pool than usual this year with a large number of high-academic kids hailing from all over the country competing to impress the coaches from many of the most prestigious colleges and universities in the nation.

Here are some of the particularly notable prospects from the opening games:

Anthony Green (Tilton) - Getting ready for his post-grad season at Tilton, Green showed tremendous improvement in his game. His versatility is what struck us at first; he can face up and shoot, drop step past his defender, and seal his man deep in the post while maintaining a strong and low position. He has good instincts and is a massive body down low. He is a scholarship prospect on the rise and with increased stamina he will certainly be one of the top big men in NEPSAC AA this season.

Pat Welch (Notre Dame Prep) – Was perhaps the most impressive prospect we saw today. With a new cut physique and improved athleticism, Welch played very well in the opening game. He knocked down shots, made plays off the dribble, and really gave a good effort defensively. A scholarship prospect, he looks primed for a breakout July. Welch will be attending Notre Dame Prep to lace up for Coach Ryan Hurd as a post-grad next season.

Brandon Twitty (Catholic Memorial) - The junior guard finished strong around the rim all game long. He did not settle for outside contested jump shots. His efficiency struck us, as he was equally deadly in the half court as he was on the break.

Jake Budde (Lake Travis HS) – An unassuming athlete, Budde had the highlight of the day with a one-handed dunk in transition.  While that play certainly caught the attention of everyone in the gym, Budde also hit a number of shots from the perimeter and rebounded the ball in high volume.

Brendan OShea  (Hotchkiss School)  – While Hotchkiss is losing one of the best players in school history next year in Yale-bound point guard Makai Mason, I don’t know if Head Coach Tim Lane could have found too many better guys to replace him than with O’Shea. A cool demeanor, steady lead guard, he is someone a coach can really trust to play within himself and make the right play. O’Shea hit open shots and did a great job of getting teammates involved.

Nick Tupanjanin (Milton Academy) - A very good athlete for Coach Lamar Reddicks, Tupanjanin makes plays in the half court and in the open floor.  He used his athleticism to effectively finish around defenders at the rim.

Ben Shungu (Rice HS) - The Vermont native knows how to play. He gets the ball to the right spot at the right time (and with some zip on his passes).  The junior point guard is one to watch as the week progresses.

Hugh ONeil (Phillips Exeter) – A long, talented big man who plays hard and is a great glue guy for any team. He was highly efficient on the interior throughout Wednesday and really made a name for himself as a great effort player.

Kena Gilmour (Kent School) - The 6'4'' guard excelled in running the floor in transition, throwing down a number of thunderous dunks both on the fast break and in the half court.  Kena is a truly elite athlete whose best basketball is definitely still in front of him. When he attacked the hoop instead of settling for jumpers on Wednesday he was virtually unstoppable.

Jamal Lucas (Kent School) - Lucas impressed with his athleticism and ability to get to the basket consistently. The lefty also displayed good separation on a nice step-back jumper.

Brandon Johnson (Loomis Chaffee) – A long, athletic wing who has lockdown defensive potential, Johnson used his abnormally long wing span to keep players in front and protect the rim. Offensively, he is a good finisher around the rim both in transition and in the half court.

Evan Davis (Summit Country Day, KY) - The 6'2'' senior from Kentucky was hot from deep early on, establishing himself as one of the best shooters here.

Trevor Dow (Choate Rosemary Hall) - Dow established himself as a top shot blocker early on, always being in good help-side position on the defensive end of the floor.  His basketball IQ will serve him well moving forward.

Tom Horvat (Marianapolis Prep) – A guard who brings great energy to the court and seems to make something out of nothing on a regular basis. He wreaked havoc on defense and made a number of good decisions in transition.

David Giribaldi (Andover HS) – A scoring lead guard who knocked down shots and just has a knack for putting the ball in the basket. While he may be a bit undersized, he has a very quick step and seems like a guy who is in no way afraid of the moment. Giribaldi will be one of the MIAA’s top returning players next season.

Jason Bird & Chris DiClemente (Tabor Academy) – The future backcourt for Coach Chris Millete found themselves on the same team, and looked like they had the chemistry you wouldn’t expect from new teammates until late March. The two played off each other well, Bird being the smooth, finesse guard who loses his defender on the way to the hoop, while DiClemente is more of a power guard who can also shoot it. All in all, these two are going to be a tough duo this season especially when you pair them with rising senior forward Jesse Bunting.

Max Hummel (Glastonbury HS) – Brought an unbelievable amount of energy throughout the two games that we saw him, and immediately became a player that coaches were subconsciously rooting for due to his great passion and hustle. While he needs to continue to develop his skill set, Hummel is a 6’5” wing who excels at playing hard.

Amanie Craddock (Don Bosco, NY) - Craddock played under control and is a physical point guard who can get to the rim anytime he wants. He showed the ability to drive & kick or drop off to an open teammate inthe post whose defender helped too much.