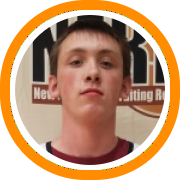 The third annual Elite 75 Academic Experience showcased top academic talent from New England and beyond to a variety of academic college coaches who were both working on the event staff as well as on hand to evaluate.

Here’s a look at some of the top frontcourt prospects from Sunday’s action:

Travell Washington, 6’9, Lawrence Academy, 2018 – Perhaps the most naturally talented rising senior in attendance, Washington put on a show on Sunday. His size, length, and skill set all suggest he’s on the verge of a breakout spring and summer. He has range to 3, can attack off the bounce, score in the post, and attack the backboard. As he becomes more and more confident, he’ll continue to emerge.

Marko Savic, 6’7, St. Andrew’s, 2018 – Savic was one of the most skilled players in the gym and also appeared to be on the verge of a big spring. He was consistently stretching the floor with a compact stroke, putting the ball on the deck, and equally efficient with his footwork and passing as he never let the ball stick. He was even intriguing on the defensive end with the versatility to check multiple positions.

Kenny Aruwajoye, 6’8, Avon Old Farms, 2018 – He was a man among boys for long stretches and one of the most pleasant surprises of the event. He has all the physical tools with broad shoulders, good size, and strength. While he’s still raw offensively, his skill set has improved from this time last year, and so he’s trending in the right direction and evolving at a rapid right.

Enike Anyia, 6’5, Wilbraham & Monson, 2017 – The unsigned senior big man has a non-stop motor. He has a soft touch around the rim, uses his body effectively on both ends of the floor, can score over bigger defenders, and wall up on the defensive end to take charges and contest shots without fouling. He should be a nice late addition to a college program next year.

Thomas Greaney, 6’6, Lawrence Academy, 2018 – Sometimes overlooked on a deep and talented LA frontcourt, Greaney seized the opportunity to make a name for himself on Sunday. He was dominant in spurts, scoring and rebounding inside, but also showed good speed in the open floor as well as some passing ability.

Mikey Spencer, 6’6, Cardinal Spellman, 2018 – A tough kid with a powerful body, Spencer competes on both ends of the floor but is also uniquely skilled. He has a pure stroke in catch-and-shoot situations, can really stretch opposing defenses out, and projects as a prototypical stretch-four.

John Bella-Hunter, 6’8, MacDuffie, 2018 – This southpaw has a high motor and is very active on both ends of the floor. He still needs to develop his frame, but he’s long, always around the ball, and willing to throw his body around. He’ll get his own points on the offensive glass, finish around the rim, and is beginning to step-away as well.

Jackson Meshanic, 6’6, Kingswood-Oxford, 2018 – After playing a lead role in the revitalization of Kingswood-Oxford basketball, Meshanic was one of Sunday’s best surprises. While his conditioning has improved, his broad shoulders make him almost impossible to get around. He moves well for his size, can anchor a team on the post, has terrific hands, and a deceptively quick first step in short drives.

Jason ORegan, 6’4, Shepherd Hill, 2018 – At 6-foot-4 and 220 pounds, he looks like an undersized power player. However, he made it clear early on Sunday that wasn’t necessarily the case. O’Regan drilled three straight threes in his first two minutes, showed good mobility for his size, a willingness to bang with bigs, and consequent versatility on the defensive end.

Rhett Carter, 6’9, Milton Academy, 2019 – A throwback style big man with great size, Carter has an extremely mature game in the post. He owns a wide array of pivots and ball-fakes, all of which he utilizes to keep defenders constantly guessing, and yet he’s also beginning to step-away and become a scoring threat facing the basket as well.

Dan Schlakman, 6’7, Milton Academy, 2019 – The future is bright at Milton Academy, especially inside the paint, where Schlakman provides a versatile forward to play in tandem with Carter. He seems to have added another inch to his frame while also expanding his skill set as he can shoot the ball out to the arc but also handle the rock as well.

Jarred Houston, 6’10, Beaver Country Day, 2018 – Undoubtedly one of the biggest stock risers of the day, Houston has the requisite size to intrigue college coaches but is more than just a big body. He was able to turn both shoulders in the post, had a polished post game, deceptive athleticism, and great timing protecting the rim as a shot-blocker. The NESCAC coaches on staff were lining up for him by the time the day was done but Houston may have scholarship level potential with further development.

Greg Lawrence, 6’6, Greens Farms, 2019 – A sophomore starter for the NEPSAC finalists, Lawrence was already a well-known talent in the Class C ranks, but he announced himself to the rest of New England on Sunday. The lefty has a nice combination of size and skill, but what really differentiated him was his high I.Q. and instinctive feel for the game.

David Tiedemann, 6’6, Westerly, 2018 – A new name to emerge, Tiedemann is far from a finished product but oozes potential. He needs to add a ton of weight to his currently lean frame but he’s long, athletic, can handle it off the bounce, and make plays for himself and his teammates. Bulking up is going to be a lengthy process but if he can do it his future should be bright.