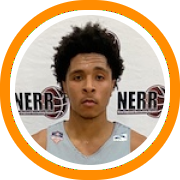 The AAVBC was created less than three years ago to give kids in the Valley of Connecticut opportunities for exposure and development.

They’re not one of the state’s biggest or most well-known programs, but they’re in it for all the right reasons, and providing their kids with opportunities that they otherwise wouldn’t have.

Bassick High School’s Isaiah Sullivan is the best long-term prospect on the roster. The 6-foot-6 forward has the requisite physical markers but shows versatile tools to develop as well. He goes through the lane with long strides and also has a solid foundation of early skill, soft natural touch, and good shooting potential. He can even add some value as a help-side defender.

Taeshaun Sanchez is one of several Derby products on the team and probably the maestro of this group. He’s a talented scorer of the basketball, but also has the characteristics of a true point guard. He plays hard, provides energy, and is verbal with his teammates. He also owns a good shooting stroke from outside and some quick playmaking ability.

John Harris is his running mate, during both the scholastic and travel seasons, and he was one of the better playmakers here. He was not only quick off the bounce but also a good vertical athlete, talented finisher and lay-up maker around the rim, and equally dangerous with either hand.

Armari Pharr and Rashad Thompson provide two more Derby products on the team, both of whom have good physical upside. Pharr is a wiry and active athlete who is unselfish and can play in the open floor while Thompson is a well-built athlete in his own right who can make some tough southpaw drives and cuts off the ball and is willing to compete on the glass and defensive end.

Henry Smith Jr. is another prospect to keep an eye on. While the junior guard may not yet have a super-polished game, he’s probably one of the most naturally talented prospects on the roster. He’s long and wiry, capable of playing at a good pace, knocking down shots from the periemter, and getting after it on the defensive end.

There’s also a pair of impact players on the roster from Kolbe Cathedral High School in Daniel Wellington and James Cook IV. Wellington is a spark plug guard. He may be a little undersized but he’s quick and athletic, able to stop on a dime, and just as dangerous with his pull-up game as he is attacking the rim.

Cook is a big-bodied guard with a versatile skill-set and scoring package. He can out-muscle opposing guards and absorb contact but he’s also a fluid handler of the basketball who can get downhill in the open floor and working to extend the radius of his scoring arsenal.

Ansonia High School is also well-represented on the roster. John Maitland Jr. is a senior with a very good shooting stroke and while he picked his spots to put the ball on the floor, he showed dexterity and efficiency alike when he did to prove a well-rounded feel for the game and basketball I.Q. Darell McKnight is a physically strong junior guard who is capable of making shots but maybe more likely to over-power smaller guards.

West Haven’t Roderick Smith Jr. is another top shot-maker on the team who provides constant, and very necessary, floor-spacing and one of the most consistent three-point threats on the team. He's also got some mismatch potential with his ability to play and rebound inside.

Hillhouse’s Keyvon Ward provides added athleticism as he’s long with a wiry build and has an extra gear covering the court on both ends of the floor.

Jadon Wolfe and Akellie Clarke are two of the youngest prospects on the roster and both benefitting from the opportunity to compete with upper-classmen. Wolfe has a good build and solid athleticism to keep developing, along with the overall basketball I.Q. that you would expect from a coach’s son. He's a versatile defender and capable scorer from the mid-range in. Clarke is only just beginning to fill out his frame and grow into his body but has some raw potential in the years to come as an agile point guard and willling facilitator with good court vision.

AAVBC may not be the biggest or best grassroots program in the state of Connecticut, but what they are is a program that is in it for all the right reasons and putting kids in a position to increase their skills and opportunities as a result.