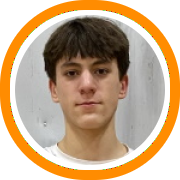 We are starting a new series that will be hosted by NERR contributor Jared Exler. It is called “A Conversation with Jared Exler.” It will feature videos with prospects of all levels. The end goal is to give our viewers a better understanding of players throughout New England not just for their basketball abilities, but also as people.

The first guest on the series was 2023 Brewster Academy & Middlesex Magic big man JP Estrella. He earned over 20 Division One scholarship offers in the past year. It has been a smooth adjustment for him so far against elevated competition with Middlesex. Estrella has played an important role on both ends of the floor to help them go undefeated this spring in Under Armour Association play.

In addition to his success on the AAU circuit, he helped lead South Portland HS to their first state title in 30 years. Estrella had 19 points, 15 rebounds, and 5 blocks in the championship win over Oxford Hills, while also averaging 20.2 points, 11.8 rebounds, and 4.1 blocks during the regular season.

The link to the full conversation is attached here: https://www.youtube.com/watch?v=iYMaZ39oDgE&t=50s