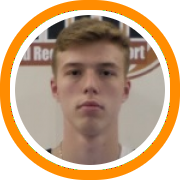 As we get deeper into the spring, more and more 2019 prospects will be making their final decisions and, as always, we'll do our best to stay up-to-date on all of them.

Here's a rundown of some of the most recent:

Babson scored their latest steal in Worcester Academy's Matthew Corey. The 6-foot-6 forward scored a division I offer at this point last year after beginning his spring with the D.C. Blue Devils but missed the summer after coming down with mono. He was still getting some of his strength back when he returned to Worcester in the fall but returned to form in time to help the Hilltoppers to a terrific 2018-19 campaign. Corey is a skilled forward with good size who specializes in shooting the ball from behind the three-point line. He should be able to make an immediate impact at the division III level and have a chance to blossom into a very important player for Babson.

Eastern Connecticut got a good one in Master's School's Rakesh Tibby. A 6-foot-7 forward who has dramatically improved his conditioning while simultaneously expanding his skill set, Tibby ran with the Mass Rivals last spring and summer and had a steady diet of scholarship level interest over the course of his high school career. He should be capable of making an immediate, and ultimately significant, impact in the Little East Conference.

Wheeler School forward D.J. Smith is headed to Trinity College next year. Smith helped Wheeler to 74 wins over his four years in the program, the most wins in a four-year stretch in Wheeler history. He finished with 1,057 career points and averaged 19 points, 13 rebounds, and over 5 assists per game this past season. The 6-foot-4, 200 pound wing has a college ready body and the potential to play, and defend, multiple positions in the NESCAC.

The St. Andrew's duo of Nathan Holt and Cameron Wilkins have finalized plans to continue their basketball careers. Holt, a rugged 6-foot-8 big man, will head to University of New England in Maine where his size and physicality should be valuable additions. Wilkins will head to Regis College and contribute with his quickness at the point and defensive prowess.

Elsewhere in Rhode Island, Portsmouth guard Jack Skrzypiec has decided to stay close to home and play for Roger Williams. An athletic 6-foot-2 guard, Skrzypiec had a big senior season including multiple 30 point games. A product of the Mass Elite grassroots program, he scored his 1,000th career point this year and was also named All-State in the RIIL.

Wentworth Institute of Technology scooped up one of the top players in the NHIAA with a recent commitment from Winnacunnet's Jack Schaake. A skilled 6-foot-7 forward who can score both inside and out, Schaake is a prodcut of the Northeast Elite AAU program. He was named first-team all-state this year in division I of the NHIAA and has the tools to be a very good college player.

Portsmouth guard Alex Tavares will be staying close to home to play his college basketball at Plymouth State. Tavares won back-to-back state championships as a sophomore and junior at Portsmouth and was named first-team all-state in division I of the NHIAA as a senior.

In Connecticut, East Catholic big man Sam Walch is headed to Kenyon College, a prestigious academic institution in Ohio. The 6-foot-7 Walch anchored the interior for an East Catholic team that won their most recent CIAC state championship this season and has a combination of size and skill that should definitely translate to the college level.

One town over in Glastonbury, Aaron Latham has opted for a post-graduate year. Latham averaged 15 points, 4 assists, 3 rebounds and 2 steals per game this year. He's a two-time All-CCC and All-State selection who was also named an CHSCA All-Star this season. Fellow Glastonbury seneior, Cameron Stiepock, has opted for a post-graduate year at St. Andrew's after missing most of the season with a broken jaw.

Shelton High School guard Brian Berritto has committed to Western New England. Berritto, who is known for his work-ethic and toughness, earned All-Area honors this season and has scored over 1,000 career points for Shelton.

Haverhill guard Daejon Pendelton is headed to New England College. Pendelton, who began his high school career at Springfield Commonwealth, is a strong and athletic player with an attacking style.