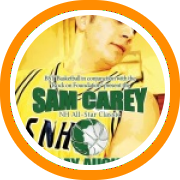 This year’s event will feature two special games. First, there will be a high school all-star game pinning the top New Hampshire players in the class of 2015 against the top players in the class of 2016. Following the conclusion of the high school game, the always-entertaining alumni game will tip off at 7PM. The alumni game will feature former New England high school basketball stars, many of who had successful college careers and some professional experience. (Rosters below)

Additionally, the Boston Celtics mascot Lucky and members of the Green Team will be providing a thrilling half-time trampoline dunk show. And, JAMN 94.5’s Sammy “SMV” Gonzalez and Shawn “Danjah” White will provide music
entertainment throughout the game.

“Sam was a very special member of the community,” said Luke Bonner former Trinity High School/UMass Amherst standout and Rock On Foundation Executive Director. “He was beloved in Manchester and beyond. The outpouring of support this event receives each year really shows the impact and influence Sam continues to have on people’s lives here.”

Sam Carey was a star basketball player at Manchester Central High School and Southern New Hampshire University. Sam tragically passed away in a car accident in 2011 coming home from Canada — where he played for the Quebec Kebs of the National Basketball League of Canada — to see his family, including his infant son and fiancée Kayte Kenyon.

BST Basketball will be donating proceeds from this year’s event to the Rock On Foundation, a 501c3 nonprofit organization founded by brothers Matt and Luke Bonner. Combined with the $3,000 raised at last year’s event, Rock On plans to use the proceeds to renovate a public Manchester basketball court in Sam’s honor.

“The Carey family has been very blessed with the Sam Carey Classic and the support of the Manchester community and the Rock On Foundation,” said Sam’s father Owen Carey. “Sam had a real heart for the kids throughout Manchester, and the fact that this game is going to help renovate a basketball court in his honor is such a blessing.”

Tickets are $10 per person. All ticket sales will be at the door. For more information on the Rock On Foundation, visit rockonfoundation.org.

ABOUT ROCK ON FOUNDATION:

Founded in 2013 by the Bonner brothers, Rock On Foundation is a 501(c)3 nonprofit organization that serves to increase community artistic and athletic opportunities. As a result of Rock On’s successful events and product collaborations, it has been able to distribute proceeds in support of its mission throughout New Hampshire, San Antonio (TX), Austin (TX), and New Orleans (LA)—places that have hosted Rock On events. In New Hampshire alone, Rock
On has distributed funds to organizations including the Concord Community Music School, Manchester Community Music School, 3S ArtSpace, Kimball Jenkins School of Art, and the City of Concord to renovate a local park’s basketball court. Rock On also plans to renovate a public basketball court in Manchester, and is going to launch an individual grant offering to provide funding for select New Hampshire natives interested in pursuing art or athletic related projects. Rock On’s New Hampshire events currently include Sneakers and Speakers Music Festival, the Midsummer Classic High School Basketball Tournament, the Sam Carey NH All-Star Classic, and H-O-O-K Madness. VISIT: www.rockonfoundation.org