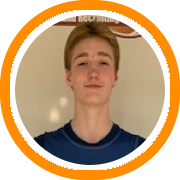 We will be releasing our updated 2023 state rankings this week, consisting of only players who are returning to the region. Once we have evaluated all the incoming prep prospects, we will have an updated release.

A pair of Vermont Academy prospects hold the top two spots with Darin Smith Jr. and Jared Berry. Smith unfortunately missed the grassroots season from injury, but showcased his wing skills beforehand to keep the top spot. Berry will provide a veteran presence to the Wildcats. He is a battle tested guard who brings a nice balance of scoring and facilitating.

Sharif Sharif continues to hold down the top spot in the VPA. He's long, athletic and one of the most experienced players in the state.  Eli Pockette, a guard from Rutland HS played a lead role in his team getting all the way to the Division One State Finals. Both were named to the Dream Dozen Underclassmen team this past year.

Another Dream Dozen member, Sawyer Ramey from Fair Haven HS proved to be one of the best guards in the VPA with his ability to impact the game on both ends of the floor. There might not be a better shooter than Spaulding's Cooper Diego, who has grown 6 inches since we first saw him as a freshman back in 2019. Mo Kanneh is one of the more intruiging prospects in the state as a 6’7 big man with good length. He held down the paint for State Champion Rice Memorial.

Kris Pokla is a much improved forward from Vermont Academy, by way of Estonia, and is just scrating the surface of his potential. Also appearing on the rankings is two sport standout Alex Provost along with his teammate Logan Vaughn, which should provide Champlain Valley Union with one of the strongest senior duos in the state.

Stay tuned for later this week, as we continue to roll out updated State Rankings for all 6 states.