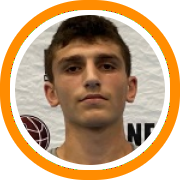 We head to Rhode Island next as we continue to update our rankings, consisting of only players who are returning to the region. Once we have evaluated all the incoming prep prospects, we will have an updated release.

Tayeshawn Cunningham-Pemberton retains the top spot. The strong and athletic guard with soft mid-range touch played an integral role in St. George's School making the NEPSAC Class AA tournament. His running mate with Expressions, Ryder Andersen, comes in at #2. After a strong summer with The House We Built, athletic forward Nejohn Fortes has taken a step forward, and should play a crutial role this winter. Patrick Spenard from St. Andrew's School is a big man who scores effectively in the post and rebounds on both ends.

One of the higher upside prospects on the list is Portsmouth Abbey School forward Bernard Dushie. He possesses an intriguing blend of explosiveness, rim protection, and self-creation/shooting flashes. Dushie's AAU teammate Azmar Abdullah earned his way to the fourth spot. The skill-set that he brings to play on or off the ball was an important part of why Bishop Hendricken and BCRI had the recent success they did.

A member of Bishop Hendricken's D1 state title team with Abdullah was Eze Wali. He is a two-way playmaking guard who also has floor spacing ability from beyond the arc. Classicals' Evanson St. Franc figures to have a starring role in the RIIL this winter, as a 6'5 playmaking forward.

Attached is a link to the full rankings: https://newenglandrecruitingreport.com/rankings/rhode-island-class-of-2023

Stay tuned for later this week, as we continue to roll out updated State Rankings for all six states.