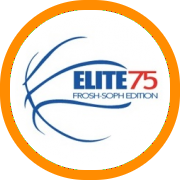 Updated rankings won't debut in those classes right away though as all spots are still up for grabs until after the Elite 75 Frosh/Soph.

What exactly is on the line?

Up until this point we've only thus far released 25 names to know in the class of 2022. As sophomores, we're now ready to publish true rankings for the first time and a good deal of that order will be finalized from watching the best prospects in the region go head-to-head at the Elite 75.

With the incoming freshmen, everything is a fresh slate. As we've said in the past, there isn't a college coach anywhere in the country who cares what a prospect did in middle school and we don't either. Instead, it's all about the future and who shows the tools, talents, and attributes that might best translate to the next level four years down the road. We'll have our full team of evaluators out, covering every court of both sessions of the Elite 75 to find them.

To put it in perspective, consider this. Every prospect rated in the top five of their respective class that played in New England as an underclassmen is an alum of the Elite 75 Frosh/Soph. So too did the likes of Andre Drummond, Noah Vonleh, Kris Dunn, Wayne Selden, Georg Niang, and over 150 other current and former D1 scholarship players.