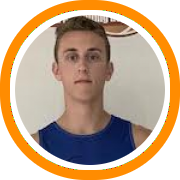 It’s the beginning of a new era at the Tilton School as the Zegarowski twins, not to mention five other scholarship players, have now moved on to the college level. But this is a program that has a history of transitioning from era to era while still maintaining their spot among the annual contenders in Class AA, and Class B before that, under head coach Marcus O’Neil.

The 2018-19 version of the Rams may not feature as many big names as years past (which include the likes of Selden, Noel, and Niang to name a few) but they have several prospects that are bound to ascend and make a name for themselves in the coming season and enough weapons to defend last year’s championship.

Eric Beckett is back for his third year with the Rams and ready to take on a leadership role. Beckett isn’t a social media darling and doesn’t have as much external hype as some other local prospects, perhaps because he has returned to Canada to play his grassroots ball in recent years, but there may not be a more efficient or productive two-way player in Class AA.

Also back for another year is Sam Okauru, the younger brother of Florida guard and former Brewster Academy post-graduate Michael Okauru. Sam is a talented player capable of making a jump this year as he has physical tools and a good shooting stroke both from behind the arc as well as off the dribble.

There are a pair of post-grads, Antony Selden and Johnny McCoy, who will be relied upon to make an immediate impact. Selden, the younger brother of former Tilton star and current NBA player Wayne Selden, has the same family athleticism and is here to add a can of polish to his game. He can make the type explosive plays that 99% of the NEPSAC wouldn’t even dream of though and so his upside is obvious.

McCoy had a storied career at Mansfield High School but went from a division III recruit to a mid-major commit in a matter of months this spring after accepting an early scholarship offer from Delaware. McCoy has continued to come on since and is the epitome of solid on both ends of the floor.

Gage Miller, a Sandwich alum, is another post-graduate from the MIAA ranks getting his first taste of high-level competition. He and Sergi Estany will provide additional backcourt depth for the Rams.

Like many prep schools, Tilton doesn’t have a plethora of true underclassmen but they do have a strong incoming trio in the class of 2020 that will build a bridge to the future.

Cem Kirciman is a Turkish import who looks like the early leader to start up front for the Rams. He’s not a prototypical big man though and much more of a crafty driving forward who could cause mismatch problems. Kyle Layman, the younger brother of NBA player Jake and former Tilton product Ryan, will be another important addition to the frontline given his high-motor and positional versatility.

Jalen Leach, a repeat junior from Bergen Catholic in New Jersey, is a very intriguing prospect in the backcourt with a fluid game and multitude of tools on both ends of the floor.

Freshman guard Torran Bosworth is another long-term prospect to keep an eye on.

This year’s squad doesn’t have the one dominant big man that Tilton has featured over the years and are generally much more perimeter oriented. In fact, the vast majority of their best players can be found on the perimeter and so this year’s version of the Rams is likely to be smaller, and maybe even faster, than we’ve seen in recent years. They also appear poised to be a dangerous shooting team with most line-ups featuring four different players who can knock down shots from behind the arc consistently.

There may not be any future NBA players or high-major big men on this team but they still have one of the league’s most impactful players in Becket, one of its best athletes in Selden, an ultra-reliable two-way player in McCoy, and an intriguing supporting cast that features a quartet of guys that could really emerge in the coming season.

They also have O’Neil and the history that his clubs have provided over the last decade-plus, and so anything who says it’s a down year in Tilton may just want to wait until the last weekend of the season.