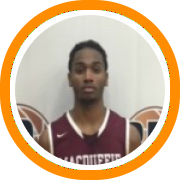 MacDuffie head coach Jacque Rivers has had some quality teams over the years but the 2018-19 campaign looks like his best chance yet to capture a NEPSAC crown as he has high-major talent at the top of the roster, the depth to overcome any injuries, and experience to match.

Put it all together, and MacDuffie is the program that many are calling the favorites in Class AA to start the season.

It all starts with the senior duo of James Bouknight and Ismael Massoud, who committed to Connecticut and Wake Forest respectively earlier this fall, and are as good of a one-two punch as there is in Class AA. Bouknight missed the entire spring with injury and while he was less than 100% during the month of July, he was still able to prove himself on the national scale. Massoud had his national breakout a month earlier in June with starring performances at multiple national camps.

Bouknight is an ultra-versatile big guard with a wealth of tools. He’s extremely smooth off the dribble, has great hands and touch, athleticism at the rim, and an increasing ability to make shots in bunches from three. Massoud is also an accomplished shot-maker from behind the arc and with his size, he’s a constant mismatch problem at this level.

MacDuffie’s veteran core doesn’t stop there though as seniors Tanahj Pettway and Matt Niemczura are both back from last year along with junior forward Richard Springs. Pettway is a lead guard who plays with great pace, has good athleticism, and underrated skill. Niemczura is a big, lanky wing who has made consistent strides in the last year and still plenty of upside left to discover.

Springs is the latest in MacDuffie’s line of high-major prospects. He already holds offers in the Big East, ACC, American, and Big Ten among others thanks to his combination of size, strength, budding skill, and toughness. If he can take the next step towards putting that all together on a nightly basis, he could be on the verge of a breakout season.

While Springs was the only notable returning junior, the addition of four new prospects in the class of 2020 makes that group perhaps even deeper than the current senior class. Up front, Chad Venning adds a wide-bodied big man with broad shoulders, long arms, and soft touch who has already made great strides with his conditioning in the last two months. Jalen Gorham is a late-blooming 6-foot-6 forward from Pennsylvania who is loaded with natural tools including long arms, big hands, and loads of untapped talent. Tyrae Washington is an athletic wing and two-way player who defends and scores from the mid-range and in. Jadon Archer, a transfer from Enfield High School, put up huge numbers in the CIAC in recent years and is making a quicker adjustment to this newfound level of competition than many anticipated.

In a year when many of the traditional AA powers seem to be lacking either the depth, experience, or true high-major talent typically necessary to win it all, MacDuffie is the program that checks all three of those boxes.

Bouknight and Massoud give them clear go-to guys with Springs being the next in that line. That trio is supplemented by Pettway and Niemczura along with four other juniors who combine to give Rivera a rotation that is as deep 4-9 as it is talented at the top. If that weren’t enough, there’s balance across the group, not just positionally, but also in terms of size, shot-making, and athleticism, which means this is a team that can come at their opponents and win games in various ways.

On paper, MacDuffie appears to be the most talented team in Class AA of the NEPSAC this year. But if recent history has proven anything, especially in AA, it’s that the most talented team isn’t always the one to call themselves the champions when it’s all said and done. So while Rivera has assembled a roster that has talent, depth, and versatility, the real key will be how they come together, develop daily work habits, and buy into a collective mission of putting the team first. If they do, they certainly have a chance to call themselves champions when it’s all said and done.