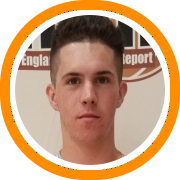 With nearly 400 high academic student-athletes competing in the All Academic Camp at Brandeis University in Waltham, MA, Division II & III coaches came by the dozens to evaluate the talent.

Throughout the weekend, please stay tuned to @NERRHoops and @AllAcademicCamp on Twitter for constant updates.

The following players stood out on Day 1:

Solomon Neuhaus (Williston, 2019)- Neuhaus is fun to watch.  He is smooth, a very good passer, and can really shoot the ball.  He fits perfectly for how the game is being played today.  He hustles & plays hard on every play, and has improved his stock amongst the college coaches already.

Dan Schlakman (Milton Academy, 2019)- If Neuhaus is the type of guard that fits the current model of basketball, Schlakman is that type of big who will thrive with how the game is being played.  He's capable of hitting outside shots & has solid post moves inside, but also rebounds at a high rate (on both ends) and moves very well laterally outside.  His ability to switch on ball screens & guard guards makes him one of the more intriguing college prospects here.

Dylan Lien (Worcester Academy, 2019)- The 6'2 guard has the gym buzzing with five 3-pointers in the first four minutes of the night game.  He finished with 8 triples all together, but  was also able to find open driving lanes and finish at the rim.

Arie Breakfield (Spaulding HS, 2019)- The New Hampshire product continued his strong play from the Super 16 & Elite 75 into tonight.  He is a smooth forward who possesses a great feel for the game.  Although his jumper is on point, he is aggressive in looking to set his teammates up for easy baskets, something he has been doing more often of late.

Rhett Carter (Milton Academy, 2019)- Carter has been a steady big throughout the years, and today was no exception.  He rebounded at a high rate & makes good decisions in the post.  But his jumper is noticeably improved over the past year, as he knocked down four 3-pointers in one game in the night session.

Graham Robinson (Concord Carlisle HS, 2020)- The 6'9 big has an improved touch inside and runs the floor hard for easy baskets.  He also has range out to 17 feet, and a shot fake that gets defenders to bite.

Matt Relihan (St. Andrew's, 2019)- The incoming Saints post-grad has a strong upper body and knocks down shots.  He always plays hard & competes, a trait that should translate when he gets his first taste of NEPSAC basketball this winter.

Teddy Fravel (Newington HS, 2019)- The 6'6 big has some emerging skill.  He showed off a spin move & finish, as well as a nice Euro step.  He rebounds the ball at its highest point and is a good interior passer.

John Lewis (Sidwell Friends, 2019)- The Maryland native is a lefty shooter who gets his shot off quick & has very good footwork leading into his shot.  He runs the lanes in transition and spots up for his shot, and with the way he shoots it his team will definitely take a transition 3-pointer!

Colby Martins (Millbrook, 2020)- Martins is a quick point guard who changes speeds well & takes off from outside the lane to finish.  At 5'10, he is small but strong, and was able to body up on his man & be physical on the defensive end.

Zachary Johnson (San Francisco, CA)- A power post, Johnson scored at will inside.  He is strong, but uses his strength to initiate contact & go through his defender.  He is also relentless going after offensive rebounds, and has a good second jump.