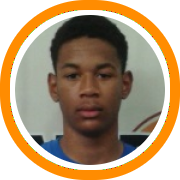 Boston Trinity Academy guard Nisre Zouzoua has done nothing but prove himself in recent months, and college coaches are finally taking notice as the rising senior guard scored three different division I offers this week.

Zouzoua had a breakout junior season, leading BTA to the finals of the Class D tournament where he scored 31 points in an MVP performance to lead them to the NEPSAC title.  A week later, he doubled his hardware by also being named Class D’s Most Valuable Player for the overall season.

He earned a spot on Expressions Elite’s EYBL squad and saw his role increase throughout all four of the stops on the Nike circuit.

This summer, he got off to an early start with a starring performance at the Elite 75 Showcase and rode that wave of momentum into the first week of the July evaluation period when we shined at the Hoop Group Elite Camp, earning a spot in the Top 40 All-Star Game and attracting plenty of division I attention in the process.

It was more of the same last week as he helped Expressions make a run to the Hoop Group Summer Jam Fest championship, earning scholarship offers from Winthrop, Bryant, and Robert Morris in the process according to the Expressions twitter page.

Zouzoua and Expressions are currently in Louisville taking part in the AAU Super Showcase for the third and final week of the evaluation period.