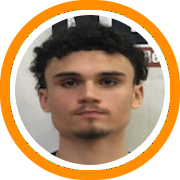 Editor's Note - Last week when we updated our 2018 rankings we provided our typical caveat - a reminder that rankings are always subjective. That is, they are always just a matter of opinion which can be formed based on a variety of variables. As we've said many times in the past, any ranking that isn't educated (do they have the experience to legitimize their opinion?), informed (have they seen all of the players enough to make an informed projection?) and unbiased really isn't worth much at all, but after that it's only to be expected that there will be a wide range of opinions. While we've always tried to gather input from all NERR contributors before publishing our final rankings, this time we're publishing one of our own's take independant from the rest of the group in order to demonstrate the essence of exactly what we mean when we say subjective. And so, in his latest Yags' Point Forward column, Mike Yagmin provides a look at how he would rank the class of 2018:

With the latest 2018 NERR Rankings hitting the streets this week, here’s a look at my personal rankings of this year’s graduating class. I’ll also try to provide some specific reasons as far as the order is concerned.

There are some glaring differences between the order in which my top-10 falls when compared to NERR and the consensus of most national scouting services. And that’s alright. Only time will tell. All I can provide is an honest opinion based on what my eyes and mind tell me. Hopefully, I can also provide motivation to those players who feel underrated and they go on to prove me wrong during their college careers. I genuinely root for that to happen!

West Virginia-signee Derek Culver comes in at #4 in my top-10 and his ability to control the paint from a rebounding/shot-blocking perspective is a huge reason for that. Culver also owns a soft touch out to 15-feet right now, although he plays with his shot mechanics too much at the free throw line. Once he reaches the college level and develops muscle memory with thousands of reps, I expect Culver to become the type of low-maintenance/high-impact big man that Bobby Huggins loves. His vision as a post passer and unselfishness as a teammate make him an extremely valuable asset at the next levels. I value Culver’s overall skillset this year in the same way I valued Hasahn French’s skillset before he headed to Saint Louis. Ironically, French was also my #4 prospect in 2017.

Noah Kirkwood comes in at #6 and his offensive versatility is something truly unique. I was intrigued when I made visits to NMH in the fall and noticed that coach John Carroll was open to the idea of making Kirkwood his team’s primary ball-handler. Sure enough, it has brought an entirely different look to NMH’s offense and has allowed the 6’6” Canadian to expand his game to another level. Kirkwood’s ability to push the ball in the open floor, make cuts on a dime and create easy offense is simply different. While he can get careless with the ball at times, Kirkwood’s medium-risk/high-reward style is something I can subscribe to instantly. While Harvard’s offense doesn’t provide the perfect fit for his skillset, I’ve heard that they provide something that makes up for it from an academic perspective.

Coming in at #9 and #10 are AJ Reeves and Cormac Ryan, two players with long New England resumes that I have ranked lower than most. Both of these players rank within my top-75 nationally, so the narrative that I don’t believe in their abilities wouldn’t be an accurate one to write.

Reeves heads to Providence as a high-volume scorer with the ability to make tough shots on a routine basis. While he’s done an admirable job of carrying his Brimmer teams for the better part of three years, Reeves will have to make a few major adjustments to his game (every player on this least will to some extent) at the Big East level. Tough shots in prep ball turn into well-defended, inefficient, bad shots at that level. Surrounded by high-major players, Reeves may very well have the ability to score efficiently and create offense for his teammates within the natural flow of an offense. If Reeves can find ways to contribute when his shot isn’t falling, he’ll be able to maximize his abilities and have his numbers translate to team success as well. The players I have ranked above Reeves have shown the ability to do that on a more consistent basis up to this point. But given what I know about his work ethic, it shouldn’t be a matter of if Reeves is willing to invest the time to make himself the best all-around player possible. It will simply be a matter of when and how he applies those skills to his game on a nightly basis.

The Stanford-bound Ryan has a smooth all-around game that should allow him to become a consistent contributor in the PAC-12 during his college career. What Ryan lacks (IMHO) is an elite-level skill that will carry the rest of his game at the next level. The players I have ranked ahead of him have consistently shown one. Shittu’s physicality, ball-handling ability, rebounding and vision give him Lottery Pick potential. Swider and Laszewski are two of the best shooters in the nation. Culver’s physical gifts are simply rare. Duke’s potential as a versatile PG/Wing with vision, athleticism and shut-down defensive skills make him a top-40 national prospect. Kirkwood is the best I’ve seen in a long time at creating space in tight spots and exploding in the open court. And the strides Mucius has made as a shooter are close to matching his exceptional bounce and potential to become a 3-and-D wing in the ACC.

Malachi de Sousa at #12 might seem high for those seeing Albany sandwiched between some of the nation’s best programs. Make no mistake about it, some of the region’s colleges should absolutely be kicking themselves for not making a bid at the versatile 6’7” wing when they had the chance. His ability to put it on the floor, knock down shots from the perimeter and create offense in the open floor make him one of the better prospects in New England. Not only have de Sousa’s numbers at South Kent made that abundantly clear this year but there is still plenty of projection left in his game.

Norris came to Brewster this season from California after committing to Oregon. His ability to effortlessly finish above the rim makes him a highlight waiting to happen and his ceiling is among the highest in the region. He’s headed to a program that has developed their fair share of pros lately but Norris has to start welcoming physicality in order to make an impact in a PAC-12 with more muscle than they’re typically given credit for. His outside stroke is clean and if he can ever maximize his physical tools, Norris could become a menace as a 3-and-D wing at the highest level. Toughness is more mental than it is physical though and only he can decide whether or not he’s ready to embrace that burden.

Some of the biggest differences between my rankings and NERR’s come with Nick Timberlake (#19) and Alex Rivera (#20). Both players remain way too far under the radar IMHO and are bound to make their future college programs look extremely smart.

Timberlake is currently in the midst of a 10-game stretch where he has averaged 27.5 points and 7.5 rebounds against NEPSAC AA competition while shooting 52% from the field. This is an extremely accurate reflection of what Timberlake brings to the table on a nightly basis at this point in his prep career. He’s tough, can knock down shots from the perimeter, always makes the right play and finishes above the rim with controlled violence. He’ll be ready to contribute as soon as he steps on campus next year.

I genuinely believe if Rivera had gone to a prep school for his senior season, or reclassified to 2019, that he would’ve become one of the most sought-after prospects in the region. Rivera is a scoring guard with all the tools and could develop into a fantastic all-around point guard in time. His bounce is real, his mechanics are true and his confidence is a product of his work ethic. I would’ve loved to have seen Rivera alongside a player like Lofton, killing opponents with dagger 3’s at the prep level. But the young man’s loyalty to Lowell is truly unique and I respect the hell out of that!

There are obvious skills that I value: shooting, versatility defensively, toughness, the ability to create offense for yourself/others and being a low-maintenance big who can clean up the boards, protect the rim and score efficiently.

When I see Gabe McClothan, I can’t help but think of St. Thomas More alum and current Long Beach St. big man Gabe Levin. Both would be consider “undersized” in a traditional sense but when a player has enough explosive leaping ability to jump over taller post players for rebounds and power through them for putbacks, I refuse to apply that label. Anybody who has watched Levin average 18.4pts/7.5rebs this season will tell you the same.

Keigan Kerby has fought his way back from being nicked up over the last few seasons and offers an enticing package for the next level as well.