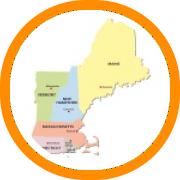 Various states are beginning to get back on the court this week with state associations taking different approaches on return-to-play protocols throughout the region, with those protocols often beginning with their respective state governments.

So who is playing right now?

Most prep schools are currently on pause. The vast majority brought their students back in late August or early September and then went into a combination of quarantine and testing. Many did fall workouts, some wearing masks, and some even played some scrimmages against programs that followed similar safety protocols in October and November. The vast majority of programs went home for Thanksgiving and aren't yet back.

In the state associations, the MIAA and NHIAA have authorized a return to play, but many individual schools and districts have opted out. Even some that haven't have gone on pause due to positive tests and contact tracing, despite the fact that testing is not a required component of most return-to-play requirements.

Both the VPA and RIIL opened practice this week. The VPA will play a reduced schedule while the RIIL will play beginning next Friday.

The MPA in Maine has a similar timetable with competition allowed to resume on January 11th, but is taking a regionalized approach depending on the amount of transmission and positive tests in each area before allowing competition.

The CIAC is currently scheduled to return to the court later this month but the Board of Control will meet Thursday and is still waiting on the Department of Public Health to provide guidance on winter sports.