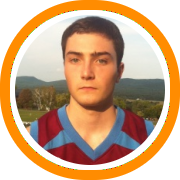 White, who is currently in his second season at NMH after transferring from Eastside Catholic High School in the state of Washington, took an official visit to the school in November.

“The academics were a big part of it,” White said, “and the basketball, the A10 is a great conference.  You don’t really find that mix of great academics and great basketball.  When I got on campus it just felt like the right place for me.”

“GW did a great job recruiting Skyler,” NMH head coach John Carroll said.  “They were in our open gym on day one, saw him a number of times this season, and made it very clear that they wanted him at GW.”

White has been playing some of his best basketball so far during his senior season.  He opened the year with a 27 point performance at the National Prep Showcase, stepping up in the absence of Zena Edosomwan and Pete Miller, both of whom were sidelined with injury at the time.

The six-foot-eight forward is best known for his three-point shooting range and silky smooth high release but has worked hard to diversify his game in the last year and a half.