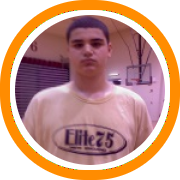 In 2010, a banner year for grassroots hoops in New England started at Junior Elite 75 Showcase II, which was held on the three courts in the legendary Case Gymnasium at Boston University. There was a ton of young talent in the gym on that rainy day in March. Here's a look at 17 8th Grade Players who left the gym on that day with a buzzzz..

Jarred Reuter - After a scholastic career at Brewster Academy via Tabor Acadmey via St. Marks and a summer-circuit career with the New England Playaz via the Bay State Jags Elite, Reuter is currently a 6’7” freshman forward for the Virginia Cavaliers in the ACC. Played on the Bay State Jags 8th Grade Squad in 2010. One of the best 8th Grade Players New England has seen in the 21st Century.

Reuter is an 8th grade phenom with post moves, footwork, and finishing ability well beyond his years.  He made several well executed low post moves but also took the ball off the defensive glass and led the break himself, and demonstrated a rapidly evolving perimeter game.

Jeremy Miller - After a prep career at New Hampton and summer circuit career with BABC via the Mass Rivals, via Expressions, via the Bay State Jags Elite, Miller is currently a freshman starting forward at Northeastern; where he is averaging 8 points and 4 rebounds for the Huskies. Played on the Bay State Jags 8th Grade Squad in 2010.

Miller was held out of action due to illness but just his size alone was enough to stand out as he is definitely someone we will look forward to seeing in the very near future.

Bonzie Colson - After a fantastic high school/prep career for St. Andrews & BABC, Colson is now a 6’6” sophomore forward at Notre Dame; currently averaging 12.5 points and 7 rebounds for the Fighting Irish. Played on the BABC 8th Grade Squad in 2010.

One of the most impressive players of the day, Colson showed his versatility by dominating the boards, leading the break, and scoring in a variety of ways.  He has great hands and feet on the block, a high I.Q. , and consistent shooting range from 15 feet and in.

Aaron Falzon - Went on to star at Northfield Mount Hermon via St. Marks via Newton North HS and for Expressions Elite via the New England Playaz via Metro Boston. Ended up ranked #75 in the final ESPN C/O 2015 Top 100 Rankings. Currently a 6’8” freshman forward averaging 9 points/game in the Big 10 for Northwestern. Played on the Blue Chips 8th Grade Squad in 2010.

Falzon is an 8th grade forward who showed a promising future with his already versatile offensive game. He can score in a number of ways, showed good back to the basket moves, a decent perimeter game, and the ability to face up.

Mike Rodriguez - The former Redemption Christian Academy (NY) floor-general (via West Roxbury HS) is currently averaging 9 points per game as the starting point guard for the Southern Illinois Salukis in the Missouri Valley Conference. Finished up playing for BABC on the summer-circuit after leading the Boston Spartans on his way up. Played on the Boston Spartans 8th Grade Squad in 2010.

A great passing guard, Mike first and foremost did an outstanding job of taking care of the basketball.  His quickness and speed allowed him to get into transition and used his great court awareness to always make his passes connect.  His great overall guard play made him an all-star.

Patrick Benzan - Currently a freshman guard at Holy Crosss in the Patriot League after a scholastic career at Worcester Academy via Roxbury Latin and a summer-circuit career with the Mass Rivals via Expressions Elite via the Bay State Jaguars. Played on the Bay State Jags 8th Grade Squad in 2010.

Benzan is a quick point guard who handles the ball well. He shows the ability to score himself as well as penetrate and kick out to shooters and is equally effective pushing the ball in transition or coming off a ball screen.

Levy Gillespie - The former Capitol Prep & CBC floor-leader is currently a sophomore guard averaging 10 points per game for the University of New Haven Chargers. Played on the CBC 8th Grade Squad in 2010.

A super talented point guard who keeps the ball on a string with his handle and is a great shooter and passer, Gillespie has the potential to develop into an elite player at the next level with his size for the backcourt, evolving athleticism, and knack for making plays.

Jared Wilson-Frame - After playing scholastically at the likes of Windsor HS and Notre Dame Prep and on the summer circuit with Expressions Elite via CBC, JWF is currently a freshman averaging 13 points for Northwest Florida State College; a D1 JUCO Program out of the Sunshine State. Played on the CBC 8th Grade Squad in 2010.

JWF is an incredible athlete with an outstanding vertical leap and ability to flash past his defenders when driving to the hoop. He also has a textbook shooting form and can score on the low post.  For his age, Jared is in a class of his own as an athlete.

Kahari Beaufort - The showman out of Hartford was probably the best perimeter player in the gym on this day. Bounced around in high school and now is currently a sophomore guard at Angelina College (JUCO) in Texas after spending his freshman year at Lake Land College in Illinois. Played on the Boston Spartans 8th Grade Squad in 2010.

A pure athletic basketball talent, his size and strength is often too much for his peers to counter but he is also a smart and lengthy player that runs the floor very well and is deadly when driving to the hoop or pulling up for a mid-range jumper.

Tyree Robinson - After a scholastic career playing at Durfee HS via Notre Dame Prep via Putnam Science Academy and summer circuit career with BABC, Robinson is currently a 6’4 freshman forward at Odessa College; a D1 JUCO in Texas. Played on the BABC 8th Grade Squad in 2010.

A man among boys all day long, Robinson utilizes his strength and athleticism to make a series of plays above the rim. He blocked numerous shots throughout the day, went to work on the boards at both ends of the floor, and drop-step-dunked on three different offensive possessions.

Morgan is a very entertaining athlete on the court with a rare ability to quickly burst past defenders and laterally slash into the lane then dish the ball to a wingman for a jump shot.  He also used his great speed as a defensive weapon quickly getting back on defense in transition.

Liam Bruno - Former Newton North HS standout is currently a sophomore forward at Wheaton College; has been in te starting-line-up for the majority of games for the Lyons. Played on the Blue Chips 8th Grade Squad in 2010.

Scored the ball in a variety of ways – making his fair share of shots, getting out in transition, and even showing some good post moves.  Defensively, he was strong as well.

Shane throughout the day played tremendous perimeter defense and played very unselfish on the offensive end.  He showed a natural ability to read the passer to cause deflections and create steals.  His coach called him “the most coachable kid you’ll find, a team player, and hard worker.

Luis Rodriguez - One of the stars of the day at New England Junior Elite 75 Showcase II went on to become a 1000+ point-scorer at East Longmeadow High School. Current whereabouts unknown. Played on the BABC 8th Grade Squad in 2010.

Luis is simply a pleasure to watch on the court for any coach.  On defense he was always the first man to step up to the ball-handler and get into textbook defensive position.  Offensively he used his long arms and outstanding vertical leap to attack the hoop and score.

Drew Shea - 1,000 point scorer at Medfield High School was a member of the vaunted Bay State Jaguars Elite Squad which terrorized the Northeast in the last years of 21st-century's first decade. Played on the Bay State Jaguars 8th Grade Squad in 2010.

A classic power forward, Shea was always a strong rebounding presence, solid low post defender, and used a very good leaping ability to outrebound many other forwards, bringing him into the all-star game.

A pure athletic guard, Neale has it all.  He is a speedy runner that loves to push the tempo in transition and if extremely tough to catch when he finds open space.  He has great passing and shooting fundamentals along with the ability to create steals on defense.