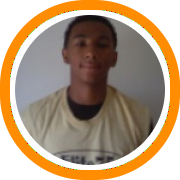 Weston started off this season by standing out at the Junior Elite 75 Showcase and earning all-star recognition in the process.  It has only been more of the same since then as Weston starred with Expressions at the recent Powerade tournament, averaging 14 points per game while playing in the fifteen-and-under division.

He kept it up this past weekend averaging 12 points per game in a tournament in Albany before falling to Team Albany's sixteen-and-under squad in the final.

"I haven't seen a player with a better work ethic than Tyree," said Expressions u14 coach Sean Floyd who also serves as a college assistant at UMass Dartmouth.

This school season Weston projects to be a dominant player once again for Keith Middle School after averaging 21 points per game last year as a seventh grader.